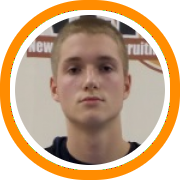 The class of 2019 is especially talented, on the wings in particular, and if Saturday night was any indication there are a number of prospects primed to emerge.

Brookline’s Chris Camille was arguably the biggest name of the bunch coming into the event and rightfully so as he boasts a long and athletic basketball body with plenty of explosiveness. He showed more than athletic tools at the Elite 75 though as he mixed in some outside jumpers and a couple of impressive passes to show flashes of just what he might blossom into down the road.

He certainly wasn’t alone as a number of other sophomore forwards and wings looked bound for bright futures.

Loomis Chaffee forward Jaiden Delaire is a youngster obviously loaded with upside. A late bloomer who currently stands at 6’7” and may still be growing. He boasts a seven-foot wingspan and seems to get bouncier and more fluid with every passing month. Combine that with a developing shooting touch and pull-up game and with continued hard work he has a chance to evolve into something special.

O’Bryant sophomore Rivaldo Soares was another big winner from Saturday’s event. He’s well built with broad shoulders, a strong frame and plenty of athleticism in the open floor. He gets downhill in a hurry going north to south with the ball, proved himself to be a highlight waiting to happen but also mixed in plenty of skill with some handle and a clean shooting stroke.

Tolman’s Dyondre Dominguez also impressed. He’s always had natural talent and potential, but on Saturday it was his production that stood out. The 6’6” lefty forward showed range to the arc but also mixed in some hard straight line drives and even a nice pass off the post. He’s another one who might just be scratching the surface if he continues to evolve at a consistent rate.

Once game’s tipped there were few guys more impactful than Jordan Mason. The Dexter School swingman makes his mark from behind the three-point line but is no less deadly with his mid-range pull-up. He can also be a playmaking threat off the dribble, especially when defenders start running him off the arc and he’s able to keep it simple and attack close-outs.

Here’s a look at the other forwards and wings in the 2019 class that stood out:

Aaron Gray, LaSalle Academy – The state of Rhode Island is alive and well in the class of 2019 as Gray was another budding wing who stood out. He’s long and athletic with excellent touch all the way out to the arc and that means he’s going to be a name we’re going to hear a lot more of in the coming months and years as he begins to sculpt that potential into production.

Cairo McCrory, Northwest Catholic – When it comes to potential and upside, there weren’t many guys that oozed it more than McCrory. He’s a high level athlete with a 6’9” wingspan and is reportedly almost a full year young for his grade. That’s a recipe that when combined with a strong work-ethic typically ends up to be a very successful one.

Daman Tate, St. Sebastian’s – He’s evolving physically and has done a nice job of starting to fill out his frame in the last year. He attacks the rim effectively and utilizes his length to play with economy of motion while covering the court and going through the lane. He was also one of the best defensive anticipators in the field, jumping into passing lanes and turning them into breakaway dunks at will.

Tyler Burton, Marianapolis Prep – Burton has been ascending for the last several months now and made increasingly frequent high level plays at the Elite 75. He runs the floor very well, contests shots defensively and shows some truly impressive athletic bursts that led one coach to claim “he can fly at times.” He also comes from good stock as his father played at Providence.

Jordan Kellier, Redemption Christian – He has absolutely huge hands and palms the basketball as if it were a tennis ball. That, combined with good athleticism and a powerful body, made him truly unique as he would attack the basket only to seamlessly go up with just one hand for powerful dunks. The southpaw is also very versatile as he’s a shooting threat when in rhythm at the arc and can also post-up with good footwork.

John Packard, Wilbraham & Monson – The first year WMA product has obviously been working hard on his body and now utilizes both strength and toughness to get to the rim. He also consistently made shots and showed deep range as he continues to find the balance between building up his body and maintaining his prowess from behind the arc.

Arie Breakfield, Spaulding – He started to make a name for himself this spring and only furthered those efforts on Friday. He's long and has an array of moves in the post including scoring over either shoulder. He can stretch the floor out to the arc and commands the defenses attention every time he gets the ball. That versatility plus a growing shot-making niche makes him one to watch moving forward.

Pete Kapanides, Bedford – He’s added an inch or two to his frame since entering the high school ranks while also continuing to develop his weapon from behind the three-point line. Kapanides boasts a strong frame and good toughness that allows him to mix it up in the lane when necessary but does his best work as a perimeter shooter.

Gob Gabriel, Bradford Christian – It wouldn’t be fair to compare Gabriel, or any young player for that matter, to an older brother like Wenyen but let’s just say there are plenty of similarities at the same stage when you look at a frame that is all arms and legs at this point and still rapidly growing. That isn’t to say he’s going to end up at Kentucky one day but this is another Gabriel who is a classic late bloomer.

Matthew Corey, Worcester Academy – With good size and a great looking shooting stroke, Corey had definite potential. His release is smooth and almost effortless and with his combination of size and skill he has the potential to play multiple positions and would be an ideal fit in a variety of different types of offenses.

Vondre Chase, Watertown – A year ago we noted how much untapped physical upside he had. Now, he’s added almost three inches to his frame since the ’15 Elite 75 while still possessing the same long arms and ball-handling ability to intrigue. He was able to take the ball of the glass and start the break himself and showed great vision with the ball in the open floor.

Josh Moncrieffe, Hoosac – An athletic and powerful forward who has a history of standing out at this event, Moncrieffe is now at the Hoosac School in New York where he is bound to make an immediate impact. He scores it going to the rim, attacks through contact and is especially good in the open floor.

Dan Porcic, Putnam Science Academy – The Putnam native has good size on the perimeter and the ability to play either the two or three spots. His specialty is shooting the basketball and he can drill open looks off both the catch and the dribble while his size allows him to get it off without much separation.

Jordan McAllister, Worcester Academy – Another first year Hilltopper, McAllister is a New York native who announced his arrival into this region on Saturday night. He’s a strong wing with a chiseled frame, an attacking style and the ability to go through contact in order to get to the rim.

Joshua Reaves, Notre Dame Fairfield – He’s a strong guard who can get downhill off the dribble and make plays for both himself and others when in attack mode. He advances the ball with the pass, has good elevation in the mid-range area and can also make open rhythm threes.

Danny Seraderian, Belmont – A forward who has done a terrific job of sculpting his frame in recent months, Seradarian looks to be in the best shape of his life thus far with a strong and fit build. He’s simultaneously working to expand his game to the perimeter and showed solid progression of his skill set in station work.

Alton Lynch, Redemption Christian – He joins a talented RCA young core to provide another potential versatile forward and big wing capable of putting the ball in the basket once he learns to let the game come to him and score within the flow.

Cooper Wirkala, Oceanside – One quick look at his frame tells you he is far from a finished physical product and so there is definite upside here left to discover. He’s fundamentally sound, able to put the ball down in the open floor as well as make open threes when his feet are set.

Javante Dodson, Brighton – Dodson started to make a name for himself this weekend and is certainly a player to watch moving forward. He possesses a strong body to bang inside but can still step-out and knock down open shots.