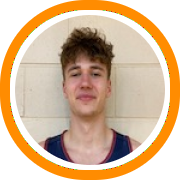 With our post-summer rankings now fully updated throughout the region's class of 2022, this week we'll shift our focus to the class of 2023, where plenty has changed after a busy summer.

Again, newly arrived prep products are not yet eligible for these rankings, until we've had a chance to evaluate them all, and so this list is currently comprised only of those prospects returning to the region OR who we saw as part of the Be Seen Tour last spring or summer.

The state of New Hampshire seemed like the appropriate place to start things off given that three of the top juniors in the region are all teaming up this year at Brewster Academy.

Most of New England didn't have the chance to see Matas Buzelis last year at Brewster, but he's the top 2023 prospect in the region and might just be the best overall prospect regardless of class. At 6-foot-10, he has the size of a forward and the ability to facilitate offense like a guard. He has made rapid strides in his game over the course of the last ten months and is ascending up national boards in a hurry now.

He's joined in Wolfeboro this year by, perhaps, the region's best two returning players in the class - Taylor Bowen and Reid Ducharme, who are transferring into Brewster from St. George's and Nobles respectively. Bowen has tremendous size, length, fluidity, and athleticism, and is now beginning to assert himself on the defensive end of the floor as well. Ducharme is a big wing with a good early combination of size and skill, along with the competitiveness necessary to maximize those tools in the coming years.