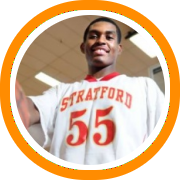 Yale University had already put together a terrific recruiting class for 2011…but it just got a lot better.

Brandon Sherrod, who led Stratford High School to a pair of state championships and took Gatorade Player of the Year honors in the state of Connecticut last year as a senior, committed to the Bulldogs on Tuesday night.

Sherrod, who is currently doing a post-graduate year at Choate Rosemary Hall, had numerous scholarship offers, including two from the Atlantic 10, and was recruited by every program in the Ivy League.

“From an educational standpoint you can’t beat Yale and the connections you will have you will have after school,” Sherrod said.  “I also love the downtown New Haven area and I’m still close enough for my parents to see me play.”

Best known as a warrior inside the paint who can bully opposing forwards with his powerful body and high motor, Sherrod is also deceptively skilled with his best basketball still in front of him.

Sherrod’s commitment punctuates what has been a tremendous week for Yale, first landing a verbal commitment for Northfield Mount Hermon forward Armani Cotton and now Sherrod.  Both players spurned offers from higher rated conferences to commit to Yale, citing the opportunity to lead the Bulldogs back to the NCAA tournament.

The duo joins Javier Duren, a highly rated combo-guard from St. Louis, Matt Townsend, a rugged rebounding specialist from New York, and Will-Childs Klein, a six-foot-eleven center from Missouri in Yale’s 2011 class.  Four of the five players are rated as mid-major or better prospects by ESPN.

“I think we can get to the NCAA tournament on a consistent basis if we work hard enough,” Sherrod said.  “I will work my hardest and if everyone contributes I think we’re capable of bringing Yale back to the tournament.”

Prior to arriving at Choate, Sherrod put together a storied career at Stratford.  He only began playing competitive basketball as a freshmen and already established himself as an important contributor by his sophomore season when Stratford took the class M state championship.

As a junior, Sherrod averaged 13 points, 13 rebounds, and 5 blocks as Stratford finished the regular season with a perfect 20-0 record but ultimately fell to Kobe Cathedral in the quarterfinals of the class L state tournament.

As a senior, Sherrod wouldn’t allow his team to lose a single game.  He averaged 16 points, 15 rebounds, and six and half blocks per game while shooting 60% from the floor and leading Stratford to a perfect season, going 27-0, claiming the class L state championship and winning a variety of individual awards including the Connecticut Gatorade Player of the Year and New Haven Register Player of the Year.