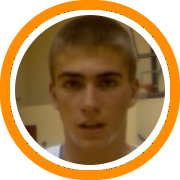 It is pretty safe to say that there won’t be another time this year when as many college coaches will be in the same gym at the same time in the state of Vermont.

It was one stop shopping for those coaches last night as virtually all of the top players in the Green Mountain State were in action at St. Michael’s gym for Lone Wolf Athletics’ Vermont College Showcase.

Even Joe OShea, who has already trimmed his recruiting list to four division I schools (stay tuned for more on that later this week) and so had little to gain by being in action, was on hand.  To his credit he not only played, but played long and hard, and showed why he is undeniably the top player in the state of Vermont this season.  The 6’4” swingman was aggressive going to the rim in the open floor and using his dribble to create enough space to get off his southpaw jumper.

Beyond O’Shea, two other guys really stood out above the rest of the competition in our eyes.  First was Jake Donnelly, the rising junior point guard from Champlain Valley Union High School.  Donnelly’s handle and control of the basketball was probably tops in the field and he showcased that on several occasions in the open floor, whipping the ball behind his back to elude defenders without ever losing control.  His dribble continued to be a big weapon in the half-court as he was able to consistently get to the rim both by breaking his man down and also turning the corner on ball screens.

The other guy who was particularly impressive was rising sophomore Harrison Taggart from Mill River High School.  Not only does Taggart have good size for the swing spots thanks to his six-foot-four frame, but he’s also got very long arms and the frame to eventually have a good build thanks to his wide shoulders.  He was able to create his own shot and score the ball very consistently throughout the night and was especially effective changing speeds in the open court and attacking close-outs.  Between his size and signs of skill, Taggart had the biggest upside of any of the underclassmen at the showcase.

Demir Smajovic is a prospect who has a lot of things going for him.  His sturdy six-foot-four frame is ideal for the wing and he compliments that with good athleticism and skills.  He showed his knack for scoring the ball on Sunday as he made a variety of shots including both long jumpers off the catch as well as a series of dribble pull-ups.

Eric Dubuque is another rising senior who made his fair share of jumpers.  The South Burlington guard has unorthodox mechanics but can really get hot from behind the three-point line.  Beyond his shot making, he played a well balanced floor game as well, handling the ball versus pressure and making a couple of nice bounce passes.

Evan Tullar’s athleticism differentiates him from the rest of his peers in Vermont’s class of 2011.  True to form, he got loose in transition and threw down a couple of hard dunks last night.  He was more deliberate in the half-court, looking to back his man down off the dribble before either attacking the rim or working for his pull-up jumper.

Connor Merrill is a player with a lot of tools whose best basketball is certainly still in front of him.  He’s another player with good size for the wing at 6’5” and also possesses good dexterity around the rim along with a skill set that allows him to score the ball both inside and out.

One of the things we were most impressed with was the number of interior players who project as serviceable big men at the college level.  Billy Boyd may have been our favorite.  He’s not the most naturally gifted player, but there may not be a harder worker or better communicator.  Boyd has dropped close to 30 pounds in the last year as he has worked hard to improve his conditioning and tone his frame.  He brings great energy with him to the court and his enthusiasm spreads to his teammates.  Inside the paint he’s productive and crafty using his body to score the ball and he also may have the best set of hands of any big man in the showcase, as he caught every single ball that was thrown his way.

Alex Snyder is a similar type big man who gives you everything he’s got on the court.  He provides a valuable interior presence by battling and throwing his body around inside the paint, rebounds the ball in high volume, and shows a nice jump hook move on the block as well.

This was our first look at Clayton Palmer and we came away impressed with what he has to offer.  He’s almost immovable inside the lane with good size and strength.  Once he gets the ball on the block he’s a consistent scoring threat with a series of nice moves at his disposal including a drop step/jump hook, running baby hook, and up and under.

Zach Currier is a tad undersized but he brings the power to the power forward position.  He’s strong as an ox, goes hard to the glass, and powers his way through contact to finish around the basket.

Ryan Tatro, almost the polar opposite of Currier, has good size, length, and mobility to go along with a pretty soft touch.  He will continue to get better over the next two years as he gets stronger and adds muscle throughout his body.

Adam Boyle is more of a combo-forward than a true big man, but he was one of the most consistently productive players at the showcase.  He has a very strong frame, that allows him to defend interior players, to go along with a solid skill package from the offensive perimeter.  He made shots from behind the three-point line, spun into short jumpers in the mid-range area, and even impressed in drive and kick action.

Playing from the Perimeter

Not to be outdone by the big men, the perimeter players offered some quality depth of their own.

Mark Mallory was as heady of a floor general as there was at the showcase.  He’s not the type of player who is going to wow you with his individual scoring ability but he understands what it means to be a point guard and run a team.  He always has his head up, sees the floor, delivers the ball with timing, and keeps the game simple.

Conor Leland is another well rounded point guard with a good feel for the game.  He’s very sound fundamentally, is a capable catch and shoot threat, and sound decision maker.

Sam Brigham may be undersized but the lefty point guard knows how to play the game and is a great intangible guy who plays exceedingly hard and competes with a lot of toughness.  He’s also a reportedly a great student.

Logan Williams is another high academic backcourt prospect.  His shot making prowess is his best asset on the court and he proved it in his second game when he connected on four three-pointers.

Jaren Scrubb is a rising junior with some potential.  He’s got a nice release on his jumper, can get his pull-up off even when closely contested, and showed some body control finishing plays in transition.

Ben Ferris is a rising junior with good quickness.  He made plays on both ends of the ball by jumping into passing lanes defensively and creating off the dribble offensively, utilizing a stutter move from the perimeter and spinning to the rim from inside of 10 feet.

In addition to Taggart, the two other underclassmen who stood out as players with solid careers ahead of them were Andrew Schuman and Casey Tipson.

Schuman is a rising sophomore from Webster Baptist High School who is extremely athletic.  Although his skills are very raw and he’s just starting to learn the game, his ability to get his head on the rim allows him to be productive scoring and rebounding the ball in high volume inside the paint.

Tipson is an incoming freshman at Rice Memorial and may just end up earning the starting point guard position for the defending state champs following Jon Goldberg’s graduation.  He comes from good stock, handles the ball very well, has good court sense, and knows what it means to compete and run a team.

Also notable were the two eighth graders who held their own in the field, Ryan Booth and Brendan O’Shea.  Look for a recap of their performance later this week in our Junior Elite headlines.