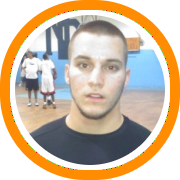 Tyler Strange has played with and against the very best prospects New England has to offer.

A Leominster native, Strange began his career at the local high school, making a big impression in his first high school game when he put up 19 points and 7 assists against Holy Name High School.
Strange moved on to Cushing Academy before spending the last two years at Notre Dame Prep.

At Notre Dame, Strange’s role exceeded his recruiting status as he started ahead of a host of other mid and sometimes even high major prospects for head coach Ryan Hurd.

“I couldn’t be happier for Tyler,” Hurd said on Wednesday.  “We’re certainly going to miss him around here but we’re very excited to see him realize his dream of playing division I basketball.”

Strange is a tough and hard-nosed lead guard with a college ready body.  Best known for his ability to create for himself and his teammates off the dribble, Strange developed his jump shot into a weapon in recent years and has also become a tough on-the-ball defender.

The latest boost to his recruiting stock occurred less than two weeks ago when we returned to the grassroots circuit with his New England Playaz squad as they traveled to Arkansas for the Real Deal in the Rock.

With Strange running the show, the Playaz advanced all the way to the finals with Strange receiving the praise of ESPN’s Dave Telep in the process.

Only a few days later Strange received a scholarship offer from Gardner Webb, who had seen him play during the course of his senior season at Notre Dame.

On Monday he visited the school’s campus in North Carolina before making a commitment on Tuesday and signing on Wednesday.

Gardner Webb is a division I school that competes in the Big South Conference.