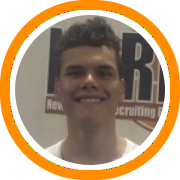 It is always best for teams from New Hampshire to get out of state, travel around and test themselves against top notch national competition to really get better. With that being said, state tournament weekend is annually a great weekend for NH basketball as you get all the top teams and players from the state in the same tournament which really helps to create interest and excitement around NH basketball.

This year’s tournament was one of the best in recent memory as far as depth of talent and number of potential scholarship players are concerned. The GS Raiders 11th grade and DC Blue Devils 10th grade teams were loaded with talent and won championships in their respective divisions, while the NH Spartans took home titles in both the 9th and 8th grade divisions.

Jordan Lates, 5’10”, Nashua High North – the quick, athletic Lates can run the point or play off the ball and utilize his scoring ability. He sees the floor well but also is lethal from the outside if left open.

Yordy Tavarez, 6’0”, Nashua High South – Tavarez is a two-guard who is a natural scorer, either slashing to the rim for some tough finishes through contact or hitting shots. He has a solid handle and can score in bunches.

Cody Ball, 6’2”, Londonderry HS – few players at this tournament stepped their game up as much as Ball. If there was an MVP Award given for the 11th grade division it would have gone to him. The kid was simply unconscious shooting the basketball all weekend. He was hitting shots from all over the floor, beyond the arc, mid-range, pull-ups or off the catch. Even if he had a defender draped all over him with a hand in his face he still hit shots. He was strong with the ball and quick off the dribble, playing at a high level and a fast pace.

Trevon Maughn, 5’10” Guard, Manchester Memorial HS – speaking of shooters, Maughn was right up there with the best shooters in the tourney. His release is so smooth it appears effortless, and he has the confidence to shoot it from anywhere on the court at any time. Maughn showed good instincts on defense, coming up with steals and quickly turning them into fast break opportunities. Just a kid that plays at a high level – if he’s on your team you’re scoring a lot of points.

Max Curran, 6’7”, Pembroke Academy – there will always be college programs looking for a kid 6-foot-7 or taller with skill and the ability to stretch the defense and shoot the basketball from the outside. Curran fits that description, and he also plays the game hard and is a great weak-side shot blocker.

Rob Wilson, 6’7”, Pembroke Academy – an intriguing prospect with good size at 6-foot-7, a strong, rugged frame and an emerging low post game. He was strong on both the offensive and defensive boards, while also showing good agility and tenacity on put-backs and inside finishes.

Dominic Timbas, 6’5”, Pembroke Academy – Timbas is a strong inside player who can rebound and score on the low block, but also has an emerging face-up game as he hit shots from 18 feet and even drained a 3-pointer. Timbas is clearly looking to expand game out to perimeter but also has strong post moves, footwork and finishing ability in the paint.

Brandon DiLucchio, 5’9”, Kennett HS – an unknown talent to most before this weekend, DiLucchio definitely had people talking. He’s a true point guard and is as quick as any player in the tournament. He pushed the tempo but never got out of control, distributing the ball effectively but also looking to score. What was most impressive is how hard he played, DiLucchio left it all out on the floor. He’s a kid you want on your team.

Austin Franzen, 5’9”, Merrimack HS – this kid is a tough, crafty point guard with a good floor game who simply cannot be left open from the outside. In the 11th grade semis his outside shooting broke the game open to get them to the finals. Franzen also broke his man down off the dribble to create offense in the half court.

Brendan Johnson, 5’11”, Bishop Brady – a high energy player who was also one of the tougher kids in the tournament. He gets up and down the floor in a hurry, playing at a fast pace and always looking to attack the rim or spot up from 3. A two-guard who can really defend people on the perimeter and also made some slick passes.

Julian Roche, 6’10”, Proctor Academy – there’s no question Roche has a ton of upside. He’s only a sophomore hut is already 6-foot-10 with good agility near the rim, an emerging skill set, soft touch inside  and he plays hard. He towers over other players his age, and did a nice job of running the floor, catching the basketball in traffic and finishing through contact. Roche was a dominant presence in the paint on both ends of the floor.

Luke Rosinski, 6’7”, Kimball Union Academy – another kid from the DC Blue Devils oozing with upside. Rosinski is a big kid with skill who plays hard and really crashes the boards and attacks the basket with authority. He ran the floor well playing on an up-tempo team, showed good hands on catches in traffic and finished strong inside with a combination of post moves and slam dunks.

Dana Bean, 6’7”, Franklin HS – another one of the weekend’s previously uncovered talents. His breakout game came while playing for the NH Rivals against the DC Blue Devils. Coming out of the middle of nowhere Franklin, NH he was going up against the duo of Roche and Rosinski. Bean refused to back down, having a great game on both ends of the floor. Roche tried to back him down in low post but Bean played great post defense then blocked Roche twice on the same possession. Bean played hard and showed a soft shooting touch in the lane.

Jack Zimmerman, 6’0”, Bishop Guertin – Zimmerman is a true point guard with pretty good size for the position. He is always cool under pressure, looks to distribute the basketball first, controls tempo but can also score if he needs to. He makes good decisions with the ball and can shoot it from long range if left open.

Matt Rizzo, 6’1”, Pinkerton Academy – there’s nothing flashy about Rizzo’s game - he just goes out there, makes plays, is efficient, smart and plays hard. Can play the 2 but his game is better suited for the 1 and at 6-foot-1 he has good size for the position. Rizzo can shoot it, make plays off the dribble, dish the ball and made some high level finishes inside.

Jonathin Makori, 5’10”, Manchester Central HS – Makori is quick, athletic and has the versatility to play the 1 or the 2. He’s a natural scorer, as he really heated up from the outside during pool play and also showed a killer crossover dribble to create space. Makori also pushed the tempo and found the open man on the break.

Monytung Maker, 6’4”, Manchester West HS – Maker was the Bishop Elite’s breakout player of the weekend. With his tremendous leaping ability he plays even taller than 6-foot-4, as he rebounded well and used a high release on his jumper to stroke the 3 ball over taller defenders. He’s extremely quick for a kid his size, has good hands and finished well inside. A rapidly improving talent.

Connor Walsh, 6’1”, Trinity HS – Walsh is a tough, savvy competitor with a solid inside/outside game. He’s only 6-foot-1 but plays bigger due to strength and wide frame so he’s able to take his man into the post but also has the quickness and skill set to hit shots or take his man off the dribble. Walsh rebounded well all weekend.

Issaiah Chappell, 5’10”, Sunapee HS – Chappell played more at the 2 but can also play the 1. He’s extremely quick and athletic with a smooth crossover dribble and pull-up jumper. Likes to play an up-tempo game, finishes well on the break and played tough defense.

Austin Whaley, 6’2”, Lebanon HS – on a team loaded with offensive firepower, Whaley was one of the top defenders on the DC Blue Devils. He can defend guards or forward, and also hit shots or finish strong inside.

Malo Roumraj, 6’1”, Manchester Memorial HS – an athletic kid who rebounds well for a guard and can also step out and hit the 3 or finish on the break.

Tim Comeau, 6’2”, Goffstown HS – a physical kid down low, Comeau used his strength and aggressiveness to muscle his way inside for rebounds and strong finishes inside.

Tshiefu Ngalakulondi, 6’5”, Proctor Academy – Ngalakulondi was the talk of the tournament. His upside is tremendous. He threw down a series of alley-oop dunks during pool play, then put on a 3-point shooting clinic in the championship game. Ngalakulondi was also dominant down low, crashing the offensive boards with authority and showing good footwork as he went up strong with put-backs, finishing through contact. Throughout the weekend his sheer athleticism and ability to score inside and outside were on full display.

Caleb Green, 5’10”, Proctor Academy – the best ways to describe Green’s play this weekend? Fast. High energy. Playmaker. Green ran the point for the DC Blue Devils and did a great job of pushing the ball quickly up the floor and getting it in the hands of the team’s many weapons, while looking for his own offense at the same time. If you’re a team that likes to run you’re not going to find many point guards in the area better to run your team. He can shoot it but is at his best creating off the dribble and making plays in transition.

K.J. Matte, 6’0”, Lebanon HS – easily one of the tournament’s top freshmen, Matte played mostly off the ball for the DC Blue Devils but also has the ability to run the point. He moved well without the ball to find open seams in the defense, had good rhythm and form to his jumper which he knocked down consistently. Also used quickness to get out, finish on the break and pressure his ma on ‘D’.

Joe Glynn, 6’4”, Portsmouth HS – it’s rare to see a freshman 6-foot-4 or taller with a solid skill set who already has a college-ready frame but Glynn is just that. Glynn is rugged but athletic at the same time. He has good leaping ability and skied up high for a rebound then immediately turned and fired an outlet pass on the money to start the fast break.

Craig Preston, 5’9”, Manchester Memorial HS – Preston is a quick point guard who is strong with the ball and can really shoot it as well. Can not only hit shots but also see the floor and hit open man.

Shon Parham, 5’9”, Portsmouth HS – a true point guard, Parham did a great job as floor in general in leading his team to a runway title. He pushed the ball when it was there but also controlled the tempo. He distributed the basketball but also hit shots.