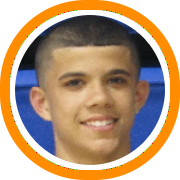 Up first, we take a look at who impressed this weekend from the Class of 2017

Tomas Murphy '17 - After an impressive showing playing against older guys last weekend at Hoop Mountain Super Week One, Murphy absolutely blew up this weekend at Prospect Camp, dominating all weekend long against some of the best competition in New England.  On the defensive end, he swept the glass clean and started the break in a hurry with quick outlet passes to teammates on the move while also aggressively pursuing opportunities to block or alter shots in the lane.  Offensively, he scored the ball over each shoulder in the post with a soft-touch and impressive footwork.  He also went to work from the perimeter, knocking down perimeter shots off the pick and pop with a rapidly-developing shooting stroke while also frequently flashing to the elbow from the block, before catching and wheeling towards the basket and extending with his length to finish with either hand at the dish.  Let the games begin, as Murphy #3 looks like another thoroughbred.

Marcus Zegarowski '17 - In terms of the combination of natural ability and feel for the game, there aren't many rising 8th grade guards anywhere more talented than Zegarowski, an electric performer who could develop into something special in the years to come.  He does it all...with flash.  New England has a Class of 2017 Back-Court Stable which is completely loaded as there are a handful of guys who have the potential to develop into high-level players.

Kimani Lawrence '17 - In addition to Murphy, another long player who showed as dominant force in the lane was a Providence native who will be transferring to the Hillside School come the fall and reclassify to the Class of 2017.  Lawrence is 6'5 with long arms, smooth and athletic, and has a fluid skill-set.  In addition to his presence in the paint, Lawrence also stepped out to the perimeter, attacking with the dribble to get to get to the rim from the wing and also showing the ability to break down into a pull-up game in which his release point is really up there.  A runaway train all weekend, Lawrence led the Wizards to an unblemished record on their way to the Championship in the NBA West.

Jamari Venter '17 (Pictured Above) - Showcased scintillating ability in the back-court, displaying an explosive combination of power and speed in attacking with the dribble to score the ball through contact at the basket.  This kid explodes when he changes directions and is the definition of a back-court dynamo, stacking up steals, and-ones and chest-bumps in bunches.  With his style of play combined with his bravado, it is hard to watch Venter groove without thinking a young Khalid El-Amin.

Ghared Boyce '17 - Smooth wing who scores the ball from all over the floor.  Boyce has really lengthened out over the past few months and was very impressive this weekend scoring the ball, using his deadly long-range stroke and his no-consciense mind-set to catch fire frequently and get into that zone.  With his shooting stroke and patient style of attack off the bounce from the wing, G.B. has a little Lawrence Moten-flavor to his game.

Azar Swain '17 -  We knew coming in that Swain was a high-IQ guard who could light it up from long-range and raise the level of play of his teammates at a high-level, but this weekend, Azar displayed an added-ability to break down the defense off the bounce, getting into the lane to create offense for a teammate or score the ball himself with a leaner or floater.

Geo Baker '17 -  If you are a good player who likes to score the ball, Baker is the guy you want to play with as his style of play from the point is well beyond his years.  He uses the stop-and-go dribble drive to break down the defense and create scoring opportunities for his teammates, while he has also developed a knock-down three-point shooting.

Noah Gray '17 -  After showing as a work-horse combo-forward early in the spring, Gray has made a smooth transition to more of a true wing player.  This weekend, he shot the ball very well from out on the perimeter while mixing in hard slashes to the basket from the wing.

Charles Hannah '17 - The stalwart south-paw anchorman has to have grown at least three inches since the beginning of the spring as he looks to be right around 6'4 or 6'5 right now.  Along with his physical growth, Big Chuck's offensive game continues to develop around the already rock-solid physical presence he brings to the lane on both ends of the floor.

Lawrence Sabir '17 - Athletic 2-guard with quick twitch speed and a powerful frame.  Gets his buckets in transition and by crashing the offensive glass hard from the wing for put-packs.  Tough defender who gets out and aggressively guards his guy on the perimeter, challenging him with a physical brand of defense.

Will Johnson '17 - Versatile combo-guard capable of playing multiple back-court roles.  Johnson can handle the ball against pressure and score the ball both from the perimeter and at the cup.   Smooth skill set with optimistic potential as he develops physically.

Michael DeMartinis '17 - Continues to impress as a versatile, skilled guard who plays a composed, team-oriented, change-of-pace game.  DeMartinis make things happen with the ball in his hands, which comes largely as a result of

him keeping his eyes up at all times to survey the floor.  It will be interesting to see this guy develop.

Nick Osarenren '17 - High-energy, physical front-court athlete who has made remarkable growth over the last six months, both in terms of his game and his height.  Standing around 6'2 at present, Nick displays the type of work-ethic and attitude which suggest he will continue to develop consistently as time moves forth.

Michael Odiana '17 - Strong athletic 2-guard who attacks the basket from the wing to score the ball consistently and through contact at the dish.  Uses breakaway speed to get out on the break and get buckets filling the lane or he'll also push the ball up the gut and lead the break himself.  Strong defender who crashes down hard to claim rebounds from the wing.

J.C. Santos '17 - Still just a pup physically, Santos has a smooth back-court skill-set and a cohesive feel for the game. Lot of natural ability on this kid...we'll be curious to watch J.C. develop.

Ryan Veguilla '17 - South-paw scoring guard who can knock down shots from deep or slash to the basket with the dribble to create offense.

Max Zegarowski '17 - Long, facilitating forward who plays selfless basketball and makes his teammates better. Understands how to spread to the floor and has the ability to knock down shots on the arc.  Thrives on playing a complimentary role in the front-court and uses his length as an asset on the defensive end.

Jakigh Dottin '17 - Powerful combo-guard who likes to push the basketball up the gut of the defense in transition. High speed athlete who provides a physical back-court presence and has the ability to knock down shots on the arc.  Word on the street is that he's a linebacker you don't want to see if you're a running back looking across the line-of-scrimmage.