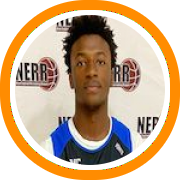 If you follow recruiting at all in New England, then you surely know about the rise of Dom Campbell this spring. He came into the AAU season with low to mid-major recruitment and will leave it with numerous high-major scholarship offers as he has begun to transform his body and prove his skill-set and effectiveness from Massachusetts to Dallas and all spots in between.

Similarly, most people know that Will Batchelder is an absolutely elite shooter who will have his choice of D1 suitors…and that Josh Morissette posses a very rare combination of skill, power, efficiency, and extreme maturity.

But those guys are really just the tip of the iceberg when it comes to the Middlesex Magic program.

Trent Mosquera, who was arguably the most impressive player the day the Be Seen Tour rolled into town, has seen his recruitment catapult up to the highest levels of D2 while Josh Baldwin has established himself as a certain scholarship player as well. Mosquera is an extremely talented offensive player whose feel for the game gives him a wealth of tools in his bag and instinctive playmaking ability. Baldwin is a powerful and athletic wing who spearheads the team’s defense and can also provide a reliable shooting threat.

Aidan Cammann, Michael Loughnane, and Brady Cummins came into the spring with scholarship offers already in hand and have all lived up to those expectations, while also demonstrating a ton of future upside. Cammann has a combination of size and inside-out skill that should give him extreme value and versatility down the road. Loughnane is an excellent passer and shooter but also a good vertical athlete who is still filling out his frame. Cummins is a big wing and strong athlete who thrives in attack mode but has made substantial strides in his jump shot.

In total, with 8 players holding committable scholarship offers in the class of 2022, the Magic are setting the standard in the region, but the team coached by program director Michael Crotty Jr. also features four more players with heavy recruitment.

Brendan McNamara and Trevor McDonald are in their eighth year with the program. McNamara has quickness, good value on the defensive end, the ability to play pick-and-roll, and the leadership you look for at the point guard position. McDonald is an ideal blend player who competes, moves the ball, takes charges, and can step-up offensively.

Central Catholic’s Xavier McKenzie and Scituate’s Keegan Sullivan round out the team. McKenzie is one of the team’s top defenders but also a quality playmaker with the ball in his hands. Sullivan has extreme pace with his speed and quickness and is able to instantaneously change the tempo of the game like no one else on the roster.

Again though, those 11 players comprise “Magic Crotty” which is always the flag-bearing team for the program. Simultaneously though, the Magic have produced over 30 college players per year for multiple seasons and appear to have more depth than ever before with three more teams, in the varsity division alone, full of college prospects.

Jacob Gibbons is a prospect who jumps right out at you. The big wing has a strong basketball frame and the versatility to impact the game, not just on both ends, but in various ways. He plays multiple positions, poses match-ups problems, defends and rebounds bigger than his size, is an opportunistic slasher, and solid rhythm shooting threat.

James Morakis is often the team’s offensive catalyst. He’s a legitimate threat at all three levels, can make shots, operate in pick-and-roll, and utilize both his perimeter size and advanced feel for the game to cause all kinds of problems for opposing defenders as he often operates as a 6-foot-4 point guard.

Will Doyle is the team’s big man and he’s a threat around the rim with a long and bouncy 6-foot-7 frame but also more than capable of facing up and pulling opposing defenders to the perimeter where he can both shoot and put the ball on the floor.

Ryan Gentilucci rounds out the frontcourt as a swiss-army knife of sorts who has a knack for getting paint touches off the dribble, is described as a defensive rock, and credited for being an elite communicator and competitor who continues to improve all aspects of his game at a rapid rate.

Tyler Morehouse joins Morakis as another legit big guard who can play on or off the ball with a combination of ball-handling, decision-making, and shooting that allows him to make a big impact now, albeit with clear future potential down the road.

Jack Stowell is one of the team’s top shooting threats with both good elevation and a quick release on his stroke and the heady passing ability and tough competitiveness to match.

Jackson McKersie is a strong physical prsence on the inside who can absorb contact, finish above the rim and protect. He is also a very diligent rim-runner.

Lateef Patrick Jr. is a two-way floor general which blends power with grace, can make shots at a high clip, is a tenacious on-ball defender, and developing pick-and-roll playmaker.

Wesley Gailliard and John Hood are two more dangerous guards. Gailiard has a very well-rounded and versatile floor game that has been made all the more dangerous by the recent gains of muscle mass he’s made to his frame. Hood is a high I.Q. player with the skill-set to match but distinguishes himself as an elite mover without the basketball.

A team comprised of multiple shooters, they are able to stretch the floor and share the ball like few others. Zach Spellman, Russell Dolabany, and Andrew Ciago all collectively help to set the tone. Spellman has a picture-perfect release and is a more than willing ball-mover. Dolabany is a consummate floor-spacer who also knows how to attack close-outs and Ciago is one of the best shooters in Western Mass with ultra-deep range and the quick release to match.

Phil Sightrue is the maestro who runs the show from the point guard position, has a great ability to dictate tempo and not get sped up, and is an ultra-reliable decision-maker.

Kyle Murray and Cole Martinez both thrive being able to operate in so much space. Murray excels at attacking the rim and finishing plays with his gritty, competitive mentality. Martinez has a college-ready body and a scoring style that blends aggressiveness with efficiency.

Colin Earle is a playmaker who can provide a shot-maker with his pull-up game but also a strong defender. Similarly, Andrew Mitchell is an absolute ball hawk on the defensive end who is a two-way playmaker and capable scorer in his own right.

Matt Murphy and Logan Satlow anchor the interior. Murphy is a heavily recruited academic prospect with a versatile offensive skill-set at 6-foot-7 while Satlow can operate inside with solid footwork, the ability to turn both shoulders, and a relentless motor.

Casey Delamargio is a skilled and hard-working guard from Needham who has been productive playing both ends of the floor this spring.

Tal Breiman is a longtime Magic guard who provides solid size, athleticism, and skill-level to match his experience.

Sam Benning is a big guard at 6-foot-3 and shot-maker who sees the floor and passes very well.

Max Jones has the positional size, shooting ability, and basketball I.Q. to play at the next level as he continues to fill-out his frame.

Greg Cooper is an athletic combo that plays with burst off the dribble, finishes above the rim, and is a pesky defender.