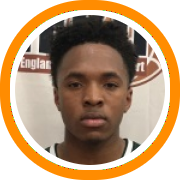 As usual, those lists all included plenty of New England representatives.

With Hamidou Diallo departing early for Kentucky, Tremont Waters is now the highest ranked New England product in the ESPN 100 as he checks in at 33rd overall, followed close behind by Brewster Academy point guard Makai Ashton-Langford.

Rivers School forward Jermaine Samuels checked in at 45, giving New England three players ranked among the top 50 prospects in the nation, while New Hampton forward Kimani Lawrence isn't far behind at 52. Cushing Academy point guard Wabissa Bede moved up the list to the 80th spot while Vermont Academy forwards Christian David and Jordan Nwora follow close behind at 82 and 87 respectively. Commonwealth Academy power forward Hasahn French was also listed on ESPN's "on the cusp" list as one of the next five prospects beyond the 100.

Vermont Academy forward Simi Shittu remained in the top 10 of the ESPN 60, which made him the top ranked New England prospect in the national class of 2018. Milton Academy guard Cormac Ryan also held his ground among the top 60 ranked prospects in the class while Brimmer & May guard A.J. Reeves was mentioned as "on the cusp."

Cheshire Academy center Chol Marial returned to the ESPN 25 and shot all the way up to #3 on the list, which is high praise considering 2019 is widely considered to be the most talented class from top to bottom in high school basketball right now.

NERR will follow-up on the release of these national rankings by updating our New England rankings next week.