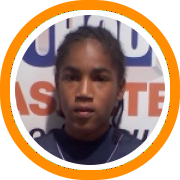 We dedicated day one of the Hoop Mountain Junior Elite Camp to checking out the youngsters and there was quite a lot to be impressed with.  Here's a look at who stood out.

Tyler Rowe-easily one of the best point guards of the west division. Went head to head in a backcourt matchup between a similar player in Devasis Sharma. Rowe is a floor general with a deceptively quick handle beyond his years. He easily glides towards the cup and even hit a step back 3 at the buzzer to spark his team at the end of the 1st half. What clearly established him as superior to the field on day one of action was that he was the most harassing defender in the gym.

Najii Khan- PG who shared time with Tyler Rowe on the Kings to form one of the most potent backcourt lineups in the division. Khan is a quick point guard who knows just when to switch gears, but when he goes full speed, he flies. He did a great job dictating pace, and showed off his flashy, yet controlled handle.

Jeff Spellman- Spellman emulates his game after the great playmaking guard Steve Nash through his feel for the game and his looks. The floor leader has enough size to be a wing but his passing ability is what makes him a true point. Like Nash, he finds a way to get to the paint for pullups but knows when to keep his dribble. His play impressed so much that he was moved up to the older division.

Jamir Henderson- arguably the most dominant player thus far in the west. Henderson is a slashing guard who is ahead of his backcourt apponents physically. The rising 8th grader thrives in the open court due to his speed and agility. The Boston native looks to be a take charge guard and with the way he connected on several dimes to teammates on the break, all signs are pointing to him being a point guard in the future.

Devasis Sharma- Along with Rowe, it was easy to see that he was one of the best point guards in the west. He impressed us with his ability to work the pick and roll at such an early age. His head was always up and whether it was for himself or to his teammate, the heady guard was always got the ball near the basket.

Brian Mukasa-Quick guard who thrived off easy buckets created by his sharp instints in passing lanes. His hustle on defense really made him shine on day 1.

Khalid Thompson- Antione Walker. That's what his teammates were calling him as the big fella surprised everyone in attendance with his uncanny ability to see the floor, get to the rim off the dribble and knock it down from outside. He truely portrayed the role of the camps point- forward. His size and dexterity could not be matched as no big man was quick enough to stay in front of him on the perimiter and no guard was big enough to match up pysically.

Chris Kinney- The Dexter swingman was very versitle in todays games as he finished around the rim and stretched the defense with his south paw stroke.

Sam Brown- the athletic lefty confused defenders with his pullups on a dime and his strength around the rim. Brown played bigger than he actually is by grabbing boards over taller opponents.

Zamon Kaliou- showed of athleticism and handle with ability to explode to the rim.

Noah Stebbins- went for 10 points in a quarter all on putbacks. The effort that this swingman brings to the gym can not be matched.

Ryan Fogarty- took care of the ball and made great decisions with his high basketball IQ. He showed some nice range on his jumper and got into passing lanes for steals.

Nick Raymond- ambidextrous finisher around the rim who was a beast on the boards. When he wasn't scoring he was creating plays for cutting teammates out of the post.

Ben Malloy- combo guard who made plays and finished in transition

The youngest of the pack:

Justin Liep- 2016- the heady point guard is the definition of lightining in a bottle as when ever he steps on the court, his teams level of play goes to new heights. He is an intrieging prospect down the road because he is tough as nails and plays every possession like he's got something to prove. While he can score it and control the ball on offense, he is best with his full court pressure on the other teams point guard.

Kyle Dokus- 2015- Dokus stands at 6'3 and counting while running the floor like a deer. While there is clearly some untapped potential there, the athletic big man was a huge mismatch as he almost got any loose ball or missed attempt that came within his vicinity.

Emmanuel Payton-Clottey- 2015- the Lefty swingman is a do it all type of player and is a dream to coach. The Fitchburg, Ma native was a force today as he finished with dribble drives, jump hooks, and on second shot opportunities. He is absolute workhorse who fights all game long.

Corey Dauraghty-2015- excellent point guard with a great court sense. Though he showed his unselfish play as a pass first point guard, Dauraghty switched speeds on the hesitation dribble many times for easy layups. He was also one of the few youngsters who had a step back jumper in his repitiore.