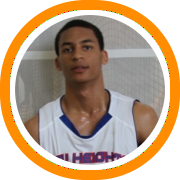 Our early choice for the second ranked player in the state is the Hotchkiss School’s newly arrived sniper, Clyde Smith.  The Texas native has made a quick impact since arriving in the Nutmeg state.  He’s silky smooth and as one high major assistant coach told us this fall “he’s got a little Stephen Curry in him,” with his ability to fill it up from the perimeter.

Timajh Parker-Rivera is the highest ranked sophomore in the CIAC.  The young big man really broke out this past summer and has continued to prosper this year at St. Joe’s.  He has all the tools and a ton of upside and with his best basketball still in front of him the next few years promise to be an exciting time.

Tafari Whittingham checks in at number four.  The Avon Old Farms sophomore is another guy who made a big name for himself last summer as he stood out both at exposure camps as well as on the AAU circuit.  Similar to Parker-Rivera, Whittingham’s best basketball is still ahead of him as he seems to improve on a daily basis.

South Kent sharpshooter Nikolas Stauskas is the state’s fifth ranked player.  He’s a tough kid with good size for the perimeter and can flat out catch fire from behind the three-point line.

Stauskas’ South Kent teammate Darwin Billingsley is in at number six.  The 6’9” big man is still fairly raw but he was effective enough to stand out at last summer’s Reebok All-American Camp and has coaches from high levels intrigued by his upside and long term potential.

Seventh ranked Kris Dunn is seventh in the state.  New London’s young star accomplished an incredible feat last year when he earned all state recognition in just his freshman season and has continued to turn heads since.

The Kent School’s Stefon Williams is eighth on the current list.  The newly arrived big man has all the tools to blossom into an intriguing prospect with length, athleticism, and a soft touch, not to mention the fact that he’s left handed.

John Papale comes in 9th on the list.  The newly arrived Choate sophomore has been solid all season long but had a breakout performance against Exeter when he connected on eight three-pointers including three in the final three minutes of the game.

Rounding out the top ten is Tom Bajda.  The swingman is another guy who broke out last summer but he’s suffered some setbacks during his sophomore season, going down with a potentially season ending injury and then changing schools and returning to his hometown high school in Stratford.