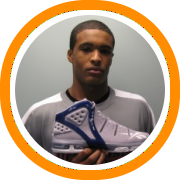 Hoop Mountain Super Week 1 wrapped up with an entertaining all star game on Friday night, followed by the camp playoffs on Saturday. The camp proved to be a haven for Division 2 and 3 talent, much to the delight of the college coaches in attendance. With a solid week already in the books, and the loaded Super Week 2 rapidly approaching, July is an exciting time at Hoop Mountain.

Like any other all-star game, Friday night’s contest was an up and down affair. Here’s who shined in a game of stars:

Andre King, Suffield Academy- The physical guard excelled shooting the ball, nailing multiple threes when defenders made the mistake of going under ball screens. King has a good stroke, and shot the ball well all week long, in addition to the Friday night barrage.

Damien McLendon, Weaver High School- A super athlete, McLendon had a couple explosive finishes in the game, as well as showing his ability to shoot the ball from deep. If McLendon came into camp under college coaches’ radar, he may have changed that with his all-star worthy week.

Jarell Byrd, St. Thomas More- The all-star game venue fits Byrd’s strengths perfectly. The camp’s most outstanding player has remarkable leaping ability, as proven by his put-back dunk, in which he caught the ball near the square and hammered the ball home with force and power. The crowd of campers and coaches was buzzing after the play, and rightly so.

Dan Brooks, Kingswood Oxford- The beast of a guard got to the rim on several occasions. His ball skills continue to improve, but his size, strength, and athleticism at the guard position were simply superior to almost everyone at camp.

D.J. Hayes, Windsor Locks- Hayes knocked down shots all week long, and the trend continued in the all-star game. He has a sound stroke and can really score in bunches. He knocked down three threes in only a few minutes on Friday night, proving just how dangerous he can be when he gets going.

Deric McCottrell, St. Sebastians- McCottrell is another explosive athlete who thrives in games where transition defense is a secondary priority. The high-riser rivaled Byrd’s put-back dunk with one of his own, in addition to throwing one down off of an alley oop. His mid-range stroke is definitely improving, which will be a nice compliment to his natural athletic ability.

The camp championship was no contest, as MOP Jarell Byrd’s squad captured the title in a route. A number of players came up big in the week’s biggest game:

Connor Merrill, Vermont Academy- Merrill looked good every time we saw him play this week, and it was more of the same on Championship Saturday. He shot an incredibly high percentage from the field, finishing plays, making open shots, and scoring in the post. His game was all about efficiency, and he was an integral part of his team’s success.

Carlin Haymon, Rivers School- Haymon has an incredible on-court demeanor, especially for a rising sophomore. He simply never gets rattled, and he never changes expression. These are great, calming traits in a point guard, and when you combine his intangibles with his blazing speed and tight handle, you get a future Division 1 player. Regardless of his size, Haymon is a winner, and he is the definition of a pure point guard.

Jake Fay, Brimmer and May- Fay embodied a shooter’s mentality all week long. He has no conscience, and when he is in rhythm, he is lights out. His stroke is textbook, and he hit on a few deep threes in the championship game that simply made you shake your head. Coming full speed off of a screen or a dribble hand off, Fay is able to catch, square up, and connect from well beyond the college three point line. He is a genuine sniper, and though he cooled off in the second half, he showed glimpses of his full potential, even in a losing effort.

Matt Ford, Medway High School- Ford is the type of player who you like more and more every time you see him play. He does all the little things for his team—rebounding, hustle plays, help-side blocked shots. He was the glue guy for the team that ended up being the runner up at camp this week. In the championship game, his toughness and grit were outstanding, even though his team was overmatched in terms of talent.