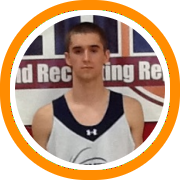 In the night cap of day two at Super Week 1, more talent emerged as two teammates demanded spotlight from their already proven point guard, Pol Olivier. Kevin Francis spread the floor with his outstanding shooting ability, and post player Juan Bustamonte took advantage of open space by finishing around the rim. Some more players that grabbed attention late in the evening were:

Colin Richey, 2014 (Choate Rosemary Hall) – Colin is a pass-first point guard with excellent vision and ball handling abilities. He is a good shooter and will adjust well to the next level. His athleticism is underrated given his ability to beat defenders off the dribble.

Manuel Miranda, (Spain) – Miranda is an excellent three point shooter with even better court awareness. His intelligence for the game allows him to not only increase his level of play, but the people around him as well.

Xavier Perez, (Spain) – Although he is a very good shooter, he seems to be more valuable as a facilitator of the offense. Perez finds open men and creates plays for all of his teammates. With a serious commitment on the defensive end, he could find himself a dynamic player.

Andrew Leone, 2013 (Loyola High School) – Despite Andrew’s height, he has been one on the most solid players in camp thus far. Every aspect of his game is at a suitable level, not to mention his high basketball IQ. He has been a leader for his team this week in every way.

Matthew Prokop, 2013 (Boston Collegiate Charter School) – As a post player, Prokop is slightly undersized but he makes up for it on the perimeter. His shooting ability mixed with his creativity off the dribble gives him an equalizer against physically bigger players.

Steve Kearns, 2013 (The MacDuffie School) – Kearns uses his explosive quickness to attack the basket with urgency. When defenders play off him he has the ability to shoot from the outside. In all, he is a very versatile offensive weapon.

Nate Robinson, 2013 (Christian Brothers Academy) – The long big man is excellent at getting behind the defense in transition. He also has a feathery touch around the basket and is able to finish plays after contact.

Jack Winston, 2014 (Needham High School) – Jack is a very smart player who can play with his back to the basket. His most impressive asset however, is his unlimited range and smooth form. He has the size to guard well in the post.

Jamie Kennedy, 2015 (Beaver Country Day) – He has one of the fastest first steps at camp and is active on both sides of the ball. Once Jamie gets to the rim he has a very successful time finishing over defenders. Athleticism is the crucial piece of his talents as they allow him to jump passing lanes.

Breakout Players of the Day

Max Risch, 2013 (Williston Northampton School) – At 6’6”, the forward is a powerful rebounder and puts himself in the position to make plays. He can score the ball very well and doesn’t show any major weaknesses.

Alex Douche, 2013 (Fairport High School) – Alex is a big post player, who is very active within the paint. His skill set doesn’t stop there, as he is very adept at shooting beyond the arc. Today’s performances were diligent and impressive against some top competition.

Felix Riascos, 2013 (Franklin Roosevelt High School) – The southpaw is a long, athletic guard who uses his athleticism to disrupt opponents on the defensive end, and get to the rim offensively. He also has the capability of knocking down the outside jumper. The key to his excellent play today was his aggressiveness coupled with his composure.