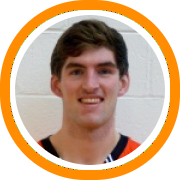 Hanover, Mass – The third part of our Elite 75 –Frosh/Soph coverage begins to focus on the class of 2018, who are only weeks into their high school careers.

Each and every year, players arrive with reputations already intact within the AAU circuit, yet to both us at NERR and college coaches alike, absolutely everyone is a totally unproven stock starting with a completely clean slate and lots to prove

With that in mind, we’re breaking up the top performances not by big names and breakouts, but by forwards and guards, since no one has earned the right to have a big name yet.

Here are some of the top forwards we saw in the 2018 class on Sunday:

Chris Doherty – Only a few players featured as refined a post-game as Doherty. In a matchup against NMH’s Tomas Murphy, the 6-foot-6 Marlborough High (MA) freshman held his own. He rebounded with toughness, displayed a couple nifty up-and-under back-to-the-basket moves and finished in transition, including a couple put backs of missed transition layups by his teammates.

Chuck Hannah – A promising young big headed to NMH, Hannah gives the Hoggers an up-and-coming athlete with nice touch around the basket. His consistent effort and relentless aggressiveness will make for some high-intensity practices as the Hoggers gear up for their 2014-15 season.

Keigan Kerby – The 6-foot-7 sophomore, who recently transferred to Brooks School from St. John’s Prep (MA), showcased a smooth outside shooting stroke, connecting on multiple baseline jumpers. He has the potential to be a lethal pick-and-pop weapon.

Tommy ONeil – Having grown nearly two inches in the past six months, O’Neill is a menacing 6-foot-8 big man with the ability to control the game. When defensive rebounding, O’Neil oftentimes puts the ball on the floor to start the fast break, and also showed exceptional court vision with solid outlet passing, including a number of over the top lobs that lead to easy transition buckets for teammates. O’Neil’s shooting stroke from inside 12-feet was equally impressive as was his ability to compete inside against other bigs.

Jared Whitt – At 6-foot-8, Whitt is a physical presence down low. Although he’s not a high-flyer like some of the other similarly sized players in the field, Whitt’s interior passing and strong hands, which allowed him to stave off defenders and snag rebounds on both ends of the floor, are reasons why he is a true big man with a clear position on the floor.

Kenneth Araujo – On one sequence the 6-foot-4 freshman from Fenway HS (MA) hustled back in transition and rejected an opponent’s layup before dropping in a floater along the baseline on the other end of the court. Strong effort and nice touch made him an exciting player to watch.

Jonathan Cenescar – The Cambridge Rindge & Latin freshman never gave up on a play. His willingness to dive after loose balls, sprint up the floor even if just to fill a lane and constant hustle produced countless easy baskets for himself and teammates.  Offensively he made physical dribble drives and looked to dunk everything…range 3 backspin

Xahn Frater – A six-foot-two swingman from World Academy (MA), Frater is an athletic wing who can make high level plays in the open floor and is an especially good finisher when in close proximity to the rim.

John Kelly – It’s probably not a fair comparison this early in his career, but when you see the lanky six-foot-four freshman from Fairfield Prep running the floor and covering the court, you see flashes of former Prep swingman Terry Tarpey.

Matthew Corey – The Londonberry (NH) wing already has good size at six-foot-four with long arms and textbook shooting mechanics, all of which combine to make him a variety intriguing long term prospect.

Colin Lomasney – The St. John’s Prep (MA) freshman is cut from a similar cloth in that he’s got good size on the perimeter, which ultimately will allow him to play multiple positions, along with a very nice shooting stroke and a consequently high upside.

Yanis Nyantenji – A New Hampshire product who is heading to World Academy (MA), Nyantenji is a strong and athletic presence in the frontcourt who rebounds, competes, and finishes against bigger players inside.

Spencer Riley – The young lefty had arguably one of the sweetest shooting strokes among ninth graders. With range that extends all the way to the three-point line, he has potential written all over him, especially if he fills out, and could end up being a multi-positional player as well.

Thomas Whitford – Though his basketball skills are still raw, the freshman from Narragansett displayed a number of eye catching moves, including a nice rebound and reverse pivot fall away bank shot from the left block. His length and raw strength make him an intriguing prospect as his comfort level increases.

Mitchell Medina – The versatile forward from Belchertown (MA) can attack inside and out, going right into contact to overpower smaller defenders with his back to the basket and utilizing his athleticism against less mobile forwards.