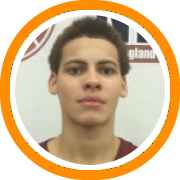 With champions crowned months ago, awards handed out, and most recruitments decided, the class of 2017 is officially in the books and that means it is time to take final inventory of what our region has produced.

2017 should be remembered, first and foremost, for the incredible collective success our region produced in both the prep and grassroots worlds. There were national championships, undefeated seasons, and tremendous depth of talent in both seasons.

In terms of individual prospects, the class will be remembered for the first prep-to-pros jump (should Hamidou Diallo elect to stay in the NBA Draft) we've seen in over a decade, the deep and talented point guard class (Tremont Waters, Makai Ashton-Langford, Wabissa Bede, and Kellan Grady among others), and a unique group of prospects like Waters, Jermaine Samuels, Kimani Lawrence, and Hasahn French - all of whom had big reputations four years ago when first arriving on the high school scene and leave having held the high ground for their entire careers.

Our final rankings are both updated and expanded, not just in New England but in all six states as well. Rankings are always debatable, but ultimately can only be judged by history as the measuring stick isn't what has happened to this point, but what will happen in the years to come.

With that in mind, here's a look at the final player rankings for the class of 2017: