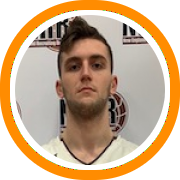 Our first look back at Sunday’s Elite 75 Academic Experience will begin in the class of 2019 where a few players, and one in particular, backed up their reputations while a group of others announced their arrival.

The best of the best was Brimmer & May’s Jordan Minor, who was still under the radar at this time last year.  Since then though he’s improved by leaps and bounds, landed his first two D1 offers, and maybe even grown an inch or two. His physical prowess was immediately evident on Sunday but what was also impressive was that he played with no ego despite being one of the most dominant players in attendance. He was active on the glass, unselfish, and showing off some deceptive passing instincts.

Michael Rabinovich and Dan Schlakman, from Worcester Academy and Milton Academy respectively, both looked the part of players who had grown during their recent prep campaigns and were on the verge of potentially big springs. Rabinovich looked every bit of 6-foot-9 and has gotten more aggressive around both rims as his frame has continued to fill out. He had big dunks in the lane and emphatic blocks alike and is getting closer and closer to realizing that undeniable potential. Schlakman’s size and talent helped set him apart while the coaching staff noted the effort he gave on both ends of the floor as well as his great communication skills. He made plays on both ends, showed some defensive versatility, put the ball on the floor, and was athletic in open space around the rim.

Another player who looks to have improved significantly in the last year is Newburyport junior Casey McLaren. A year ago, he made a debut of sorts at this event, while Sunday he returned as one of the most impactful wings in the field. He’s leaned out his frame, extended his shooting range, and polished his release in order to become more explosive and dangerous from distance.

Here’s a look at some other prospects that we weren’t as familiar with coming in, but left having proved themselves clear college prospects.

Andrew Hartel (Cape Elizabeth HS, 2019) – The 6-foot-9 Maine native was one of the pleasant surprises on Sunday. He had good size along with the versatility to be effective both inside and out. He was comfortable with his back to the basket, able to score with both hands in the post, and very fundamentally sound using the glass. He rebounded well but also handled the ball and made reliable decisions on the perimeter.

Conor Gibson (Noble & Greenough, 2019) – A skilled 6-foot-7 forward, Gibson had coaches buzzing right away, including several who suspected he might end up being too good for them. He shot the ball with range and equally well pulling up off the dribble while also showing enough versatility to score and rebound inside.

Connor Peterson (Tabor Academy, 2019) – He’s well-built with long arms and a strong body and the high motor to maximize his physical tools. He plays with a high energy level, goes after rebounds, isn’t afraid to attack the rim, and capable of rising up on an unsuspecting defender. He also had enough skill to make some standstill shots from the perimeter.

John Lowther (Hingham, 2019) – A powerful wing player with enough size and strength to guard bigger players inside, Lowther was another big stock-riser from the event. He made shots from the perimeter and showed some definite explosiveness to rise up with force in the open court. He left with a lot of buzz from college coaches.

D.J. Smith (Wheeler, 2019) – He started to separate himself right away in the competitive breakdowns as he used his strong body to get to the rim and made a number of tough finishes with good touch. His athleticism continued to come to the forefront as the day went on and by the time it was over he had distinguished himself as a very clear college prospect.

James Gascoigne (Arlington, 2019) - Our first look at the undersized forward since he was named a league all-star this past season, Gascoigne has a strong, college ready body that allows him to be physical inside and play bigger than he is. He can also step-out to stretch opposing defenses.