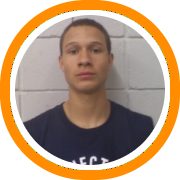 Bloomfield – With defending champions Sacred Heart opting to compete in Class LL, Bloomfield has the most experience in the division.  They return a terrific senior core with Denzel Jones and Rashad Moore.  Jones is an incredible athlete who gets his head on the rim on both ends of the floor and can dominate the game defensively.  Moore leads the team on the offensive end as the southpaw scorer can flat out put the ball in the basket.

Cromwell – The Panthers are the defending Class S state champions and coming off a 26-1 season.  They return their go-to player from a season ago in guard Isaiah Salafia, who should pick up right where he left off a season ago as one of the state’s best individual talents.  However, others will need to emerge to replace members of the supporting cast as seniors Austin Foose, Dave Grande, and Kyle Madej will all be counted on, as will sophomore Brett Director.

Trinity Catholic – One of the few big time programs in the state to be competing in a smaller division, Trinity is a favorite in class M despite losing a ton to last year’s senior class.  Tevin Baskin and Eric Jean-Guillaume are gone from last year’s Crusader squad while Remy Pinson and Takari Smalls are both returning double figure scorers.  With young players like Devin Coleman his team will reload more so than they will need to rebuild.

Sheehan – The defending Housatonic champions in the SCC have some pieces to replace but they return perhaps the purest point guard in the state and Phil Gaetano will ensure that the Trojans are again among the prime contenders in Class M.  Gaetano will be ably assisted by senior big man Bret Biestek who is a returning starter and double figure scorer.

Hyde Leadership – Hyde had a terrific 08-09 campaign, finishing the season with a 23-4 record but falling one game short in both the Shoreline Conference and Class S finals.  With a loaded returning roster featuring DeShawn Murphy, Montel Wolcott, Kendell Groom, and Joe Lambert, Hyde is loaded and more than poised to get over the hump in 09-10.  They have sheer talent, size, depth, and athleticism, and with Cromwell now playing in Class M there is no one standing in their way.

Kolbe Cathedral – A new era has begun at Kolbe Cathedral with former UConn star Chris Smith taking over on the sidelines.  Coach Smith will have to help Kolbe get over the loss of star swingman Dominique Langston, currently making a stop at St. Thomas More Prep School en route to Quinnipiac.  This year’s Kolbe roster will be led by Ronnie Underwood who will rely on his slashing ability and past experience to lead Kolbe through a challenging regular season and into the Class S state tournament where they should be able to do damage.