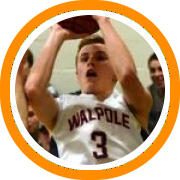 On Wednesday night, the Bay State Magic hosted their 4th annual College Showcase at Brandeis University.  There were 35 college coaches in attendance to watch players go through shooting, ball handling and transition drills mixed with five-on-five scrimmaging for almost three hours.  Here is who stood out:

Conor O’Brien, Thayer Academy ’14 – Conor is a long athletic forward who can shoot the 3, attack the basket and finish with a flourish in transition.  At 6’6”, he presented matchup problems all night long.

Ryan Fogarty, Walpole HS ’14 – Ryan did a great job of attacking the basket and finding open teammates in transition.  He also keeps the defense honest with his ability to knock down the three ball.

Patrick Gill, BC High ’14 – Patrick is a very well rounded player who combines shooting and astute decision making from the wing.

Kamaurre Williams, Madison Park HS ’14 – At 6’3”, Kamaurre uses his bouncy athleticism to attack the rim with ease.  His athletic abilities should translate well on defense and in transition at the next level.

Anthony Green, North Quincy HS ’14 – At 6’8”, Anthony is a long, raw athlete who has started to turn from project to player.  He is an active shot blocker who is now finishing plays above the rim in traffic

Tre’von Betts, Weymouth HS ’14 – Quick guard with lightning fast hands who does his best work off the dribble as a scorer and passer.

Bright Futures Ahead for These 5:

Javon Taylor, Beaver Country Day ’16 – Lefty is tough off the dribble and has a knack for finishing through contact around the basket.

Chris Bell, Norwood HS ’16 – Young point guard prospect is adept at driving right and left while making sure to get his teammates involved.