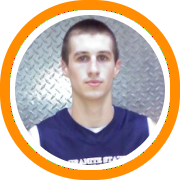 Division I Belongs to Bishop Guertin

Bishop Guertin captured their first state championship in 28 years and it was only appropriate that the senior duo of Connor Green and Sean McClung finished with identical 22 point performances.

Green finished the game with 22 points and 11 rebounds while McClung had 22 points along with seven rebounds and five steals as Bishop Guertin defeated Trinity 54-46.

Trinity’s Mabor Gabriel was the story in the first half, scoring 13 of his 15 points, while Wol Majong (21 points) provided a third quarter spark to give the Pioneers a 36-35 lead heading into the fourth quarter.  But the lead was short lived as McClung opened the final period with back to back three-pointers to give Bishop Guertin the lead for good.

Defense was the true key in the fourth quarter as the Cardinals didn’t allow Trinity to score a single field goal in the last five minutes of the game until Zach Stevens hit a three-pointer with just three seconds left on the clock and the outcome all but decided.

The NHIAA Division II championship game turned out to be a classic defensive battle, with Milford ultimately holding on to defeat Portsmouth 48-42.  The win gave Milford their second consecutive state title and completed a perfect season with a 22-0 overall record.

Milford took a 24-14 lead into halftime, forcing Portsmouth into 12 turnovers in the first 16 minutes but not able to take full advantage with their own offense sputtering.

Portsmouth gradually chipped away in the second half, ultimately closing the gap to just two with 1:49 to play in the game, but Milford senior guard Mike OLoughlin responded with a strong drive for two of his game high 18 points.  He also had seven rebounds and nine steals.

OLoughlin’s running mate Jamie Holder chipped in with 14 of his own, including the 1000th point of his career in the second quarter, while Mike Mitchell and Kyle Nelson were also critical on both ends of the floor.