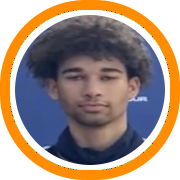 Patrick Massaroni’s first five years at the helm of the Archbishop Stepinac program have seen an ascension that is potentially unmatched in New York high school basketball over that time.

18 graduates have gone on to play college basketball including the likes of Alan Griffin at Syracuse, RJ Davis at North Carolina, and Joel Soriano at Fordham among others.

In 2019 they were ranked #1 by the LoHud/Journal News before returning to the finals of the New York CHSAA AA city finals.

Last season, they won the New York AA Archdiocesan championship and had earned the top overall seed in the City Playoffs before the pandemic brought the season to an end. They were again ranked among the top 25 high school programs in the nation by multiple outlets and also #1 overall throughout the season by the LoHud/Journal News. Additionally, they played their first nationally televised game on ESPNU while producing a McDonald’s All-American, Jordan Brand All-American (Davis), USA Basketball Gold Medal winner (Griffin), and four All-State honorees (Davis, Griffin, Chimezie, and Luke Fizulich).

This year, they promised to again be one of the very best teams in New York, even as Griffin continues to rehab an ankle injury, but at this point are only scheduled to play a seven-game series with Iona Prep because of the ongoing implications of the pandemic.

Last week, the Be Seen Tour traveled to White Plains to see them practice and found a team full of college prospects.

With Griffin out of the line-up, Chimezie takes over as the team’s top player. The future Terrier is powerful inside and able to dominate the paint, but also versatile. He runs the floor well enough to be a factor in transition, is a high-volume rebounder, and increasing capable of facing-up from 15-18 feet. In short, he’s a mid-major caliber talent who should make an immediate impact in the Patriot League.

Jonah Phang is about as good of a back-up big man as you’re going to find. The 6-foot-8 senior is strong with a good build and a name that local small colleges should be all over on the recruiting trail.

Josh Zangerle is a 6-foot-5 wing and potent shot-maker from behind the three-point line who is one of the team’s most dangerous perimeter scorers. A two-year varsity player, he’s capable of making shots in bunches from behind the arc and is also a match-up problem due to his positional size and strength.

The junior class is the deepest in the program. Isaiah Alexander, the younger brother of former McDonald’s All-American Kahlil Whitney, is new to the team after transferring from Bethlehem Catholic in Pennsylvania. He’s a 6-foot-7 athlete who can put it on the floor, play in transition, and finish. He holds several early D1 offers, the latest of which came from Pennsylvania just hours after the Be Seen Tour was in town.

Sam Gibbs is another Ivy candidate. A three-year varsity prospect who has grown another inch since last year, Gibbs is a 4.0 student who already holds three early D1 offers. He is also one of the clear leaders here. As verbal as he is smart and skilled, Gibbs has a great feel for the game, ability to read the floor, and knock down open shots.

Francisco Mattei and Joel Baez are two more returning juniors with D1 offers already to their name. Mattei is a bulldog point guard who is strong and tough. The southpaw is strong with the ball, able to run the show, but also a playmaking threat when he goes into attack mode. Baez is a very intriguing long-term prospect because he has terrific perimeter size at 6-foot-5 with a sturdy frame, but handles and passes the ball like a true guard. He can slash, make decisions in the open floor, and play multiple positions.

The 2022 also features some impressive bloodlines (in addition to Alexander). Bryce Randolph is the younger brother of former Arizona guard Brandon Randolph. He’s still early in his development and coming off a bad leg injury, but he’s fluid with good size and clear long-term tools as he grows into his wiry build. Declan McIntyre comes from a basketball family as well and is the nephew of Pittsburgh assistant coach Tim O’Toole. He’s fundamentally sound, skilled, and a particularly good outside shooter.

Even Luke Marino, who is a multi-sport athlete who does his best work on the baseball team, has a good stroke from behind the three-point line with very soft natural touch.

Ben Lyttle and Cole Decker are two sophomores on the varsity squad this year. Decker is a shot-maker with good size on the perimeter while Lyttle is a 6-foot-4 forward who compensates for his lack of size with great upper-body strength, length, and, not just a high-motor, but a rugged mentality on the glass.

The best long-term prospects when we were in the gym though were the freshmen – Jacob Hogarth and Boogie Fland. Hogarth, a 6-foot-8 forward, is still growing into his body a bit but has good hands and feet, a soft face-up touch, established mid-range game, and just the right mentality and early humility to ensure he keeps developing. Fland is a skilled and crafty guard who is slender right now but can make shots and plays off the bounce alike with an impressive early feel for the game.

In short, after ascending more in the last five years than perhaps any other program in New York, it is clear that Stepinac is here to stay. They are well-coached, have nothing but college prospects in the program, and quickly becoming a destination landing spot for top talent throughout the area.