Be Seen - New England Storm u15 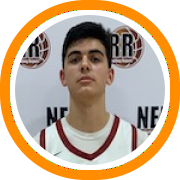 There was an unusual dynamic when we watched the New England Storm workout.

They got better with each passing year.

Most teams get better as they go up in grade, but for the Storm it was actually the opposite, at least when projecting out talent long-term.

This was the best u17 team they’ve had in recent years, but the u16 team was even better. The u15 team was the best of the bunch though and both a result of the program’s especially strong middle school teams in recent years and a sign of things to come in the future at the high school level.

Rollie Castineyra jumped out with his skill level and productivity. Coming off a freshman campaign at St. John’s Prep in which he scored over 15 points per game, he’s already a big time-shooter with a strong body. He’s also a very smart player though who understands the game, plays with his head up, and passes very well.

Central Catholic’s Marcus Rivera missed the workout but is another highly talented guard who is already making a name for himself.

While Castineyra and Rivera are already impact players, the group also has a handful of clearly talented long-term prospects who are just beginning to scratch the surface of their potential.

Javari Ellison was one of the first to catch our eye. The 6-foot-4 forward is long, far from a finished product physically, and shows some really intriguing inside-out potential to cultivate in the future.

Some other prospects that stood out with their long-term potential included Lawrence High School’s Nas Perez and Pinkerton Academy’s Anthony Chinn. Perez is long and fluid on the wing with good athleticism off two feet. He showed a floater and different offensive tools but also shared the ball and tried to play the right way.

Andover’s Ryan MacLellan stood out as a very skilled young guard. He already shoots the ball at a high clip with a clean stroke and the type of compact release that should eventually translate well to the next level.

St. Mary’s David Brown Jr. was running the show at the point guard position with maturity beyond his years. He handled the ball well, understood how to organize the team, and had enough individual offense to make plays.

Bishop Guertin’s Matt Santosuosso is a strong-bodied guard and another key contributor in the backcourt while Central Catholic Markys Bridgewater is a player to keep an eye on as well.

Michael OBrien is a developing big man who St. John’s Prep with good size, soft hands, and a willingness to play with his back to the basket.

Gabe Copeland is coming off a big freshman season for a very good Beverly team and started at forward for the Storm. He’s physical and strong for his age with a solid skill-set, shooting range, and mismatch potential.

Collectively, this is a group that might not have notoriety beyond their age group yet, but those in the know are well aware of what’s coming, and it won’t be long before college coaches do too.