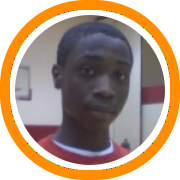 Scouting young players ages 13 and 14 is always hard because they are well, 13 and 14, but here are a few notable young players from another BasketBull tournament this weekend.

Jonathan Joseph, PG, BABC Academy - He beat everyone down the floor in transition and was good at determining when his bigs would get the rebound so he could leak out. Both on the break and in transition he kept his head up, and showed off his court vision with a sense of style, one particular no look pass was definitely a crowd pleaser. He drew a lot of defensive attention off the dribble drive, which often allowed him to make the easy and obvious pass. He hit several jump shots and only needs to fine tune his mechanics.

Jeremy Miller, PF/C, BABC Academy - This kid was very very very lanky. He was probably 6'6" already and his wingspan was even bigger. His incredibly long arms allowed him to get many rebounds, several out of position, and they also got him a few nice blocks. He’s definitely someone who will blossom as he continues to learn the game.

Luis Rodriguez, SF, SECC All Stars - Rodriguez wanted the ball and was determined to take it to the basket – and he went to the rim hard and aggressively and wasn't flustered by help defenders or contact. Also showed range, hitting a 3 without hesitation and without altering his mechanics.

Gerad Adams, C, MABC Bengals - Big in both ways, this young player towered over his competition vertically and was also plenty powerful. He had a surprisingly nice touch around the hoop, with a nice jump hook as well.

Marquis Holman, SF, MABC Bengals - Active on all sides of the ball, Marquis hustled and rebounded aggressively, using a combination of athletic ability and pure desire to clean the glass and pick up several easy points on put-backs and in transition. He also moved well without the ball, rare for someone so young.

Nick Jacobs, SF, MABC Bengals - He got past defenders with a dribble or two and converted several hard to make runners in traffic.

14u
Boston Saintz defeated Connecticut Basketball Club in the final 51-50.

Ramon Gibbons, SG/SF, Boston Saintz/Bearcats - Gibbons showed off explosiveness and penetrated the defense with ease. He either finished strong, or was able to find his open teammates for the assist once he drew the help defense. Utilized a pull up jumper as well, and always went north-south, never east-west. Because he was so strong at finishing around the basket, his lack of an ability to score with his left hand was evident, but that will come with time and development.  He capped off his weekend with some heroics down the stretch of the final game as, with his team down by 1 with 7 seconds to play, he drove left down the lane and tossed up a runner as time expired…the ball fell through the hoop to give the Saintz the win and the championship.

Joey OConnell, SG/SF/PF/C, Indoor Action - This tall kid seemed to be able to play any position on the floor. He started for Indoor Action in the 5 spot because he was pretty easily the tallest kid on the team, but this post man showed off a beautiful jump shot with picture perfect mechanics, and already has a refined post and midrange game, complete with fakes, turnarounds, and other moves. He could not be given the open jumper because it was apparent that it would be automatic. He ran the floor well, often even beating the guards up and down the court. On defense, he was very active, using his length and a good sense of timing to block at least 3 shots, and forced a turnover or two by stepping into the passing lanes.

Makai Mason, PG, Indoor Action - This PG played smart, relentlessly attacked the basket, saw his shooters well, and wasn't afraid to pull the mid-range jumper if it was open. In fact, he had a very nice jump shot.

Matt Sulda, SG, Indoor Action - It took him awhile to get going but after shooting 1/4 to start off the game, this left handed shooter knocked down his next 4 shots, 3 of which were 3s, of which 2 were both from the same, seemingly favored right corner spot.

Pat Dickert, SG, Indoor Action - Another pure shooter on the Indoor Action team, Dickert displayed that he wasn't strictly one dimensional. He finished many contested runners inside the paint and even finished well with his weak hand.

Sam Blake, SG/SF, SECC All Stars - This player had a strong dribble drive and got to the rim early and often, but tended to need the help of an extra step to let him do so. Once the refs cracked down on him, he became less effective offensively.  As he learns to clean up his footwork he’ll be a dominant slasher.

Bobby Ahearn, PF/C, BABC Academy - This hustle player often came flying out of nowhere to get rebounds, and earned his points through simple effort. He noticeably outworked his opponents underneath and got rebounds he shouldn't have gotten simply because he wanted it more. He was sure to make himself easy to pass to, as he was always cutting to the right spot underneath.

Goodluck Okonoboh, C, BABC Academy - He was big, but somewhat lanky, presence that was very raw but showed a lot of promise. His height and willingness to fight for position drew a lot of defensive attention and forced the opposing team to often go with a Hack-A-Shaq type strategy, because he has not yet developed into a reliable free throw shooter. He did get some nice rebounds and scored a bit inside, but he’s no doubt a big time up and coming prospect.