Baskerville to Central Earlier than Expected 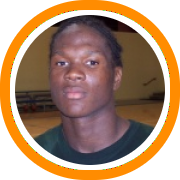 When Chris Baskerville arrived at Lee Academy this September, it was with the expectation that he would be there for the entire school year.  But as the Hartford native has found out, plans can change.

While his teammates are just arriving back at Lee for the second part of their season, Baskerville is registering for classes at Central Connecticut where he is expecting to join a new set of teammates any day now.

Baskerville had originally committed to CCSU in the fall of his senior season at nearby Bulkeley High School.  After the school year, he decided to attend prep school in hopes of expanding his overall game and getting his body ready for the rigors of division I basketball.

In his short time at Lee Academy he shattered all expectations as he quickly became one of the most efficient interior players in all of New England.  While there were plenty of players with bigger names there were very few who competed with the same level of intensity.  That was never more apparent than at the National Prep Showcase when Baskerville scored 36 points and grabbed 12 rebounds against Worcester Academy by running the floor in transition, crashing the offensive glass, and finishing everything around the rim.

He was also was one New England’s most consistent interior players as he came to play every time on the floor.  In fact, in what has turned out to be one of his last games in a Lee Academy jersey, Baskerville more than held his own against Louisville bound big man Terrence Jennings, as Lee stretched Notre Dame Prep to overtime.

Now Baskerville joins a CCSU team that he could be ready to help right away.  With no player bigger than 6’6” on the roster the Blue Devils would certainly benefit from a player of his prowess inside the paint.

Baskerville’s decision to join CCSU at mid-season is made possible by the fact that he was an academic qualifier coming out of high school last year.