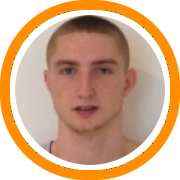 Chris Baldwin will transfer from Springfield Central High School to Notre Dame Prep of Fitchburg and reclassify to 2016 in the process.

The six-foot-eight power forward has long been known as one of the most naturally talented prospects in New England, but has yet to put it all together on a consistent basis.

He showed flashes of brilliance this summer, combining his naturally strong and athletic frame to play above the rim in the open floor and also showing off an expanding face-up game at times as well.

“We’re very excited about adding Chris to our team,” said Notre Dame Prep head coach Ryan Hurd, “I think he has a chance to be very good.”

Baldwin joins a variety of local New England products on next year’s Crusaders team including Winston Morgan and Pat Welch among others.