Top Players in the NHIAA 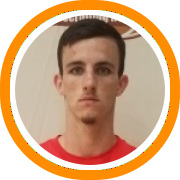 After leading his Pinkerton squad to the Division I title game, Geo Baker became the latest big name local talent to leave the NHIAA for the prep school ranks over the summer. Pinkerton has now had two future D-I college players transfer to prep school in the past two years, as New Hampshire commit Luke Rosinski left the year before.

Still, Pinkerton is one of the favorites again this season in a wide open Division I in the NHIAA. Here’s a look at the top players in NH’s public school ranks.

Keith Brown, Pelham – there seems to be a consensus around the granite state that Brown is the best player in the NHIAA. He has the ability to drop 30 points on any given night – he actually scored over 50 in a summer league game. Brown has slimmed down this season which has made him quicker. He is now a legit point guard prospect at the next level. Brown can drain threes, post up smaller guards and grab boards. He’s an all-around player, a hard worker and a winner. Brown led Pelham to an undefeated championship season last year as a junior.

Joe Bell, Bishop Brady – with his older brother Jourdain Bell now graduated (and playing at Colby Sawyer) it is time for Joe Bell to really shine and be the go-to guy for the defending Division II champs Bishop Brady. Bell is a quick, explosive player who is an elite defender, can shoot the basketball, take it to the rim and is a very good rebounding guard.

Dana Bean, Franklin – the top big in the NHIAA, Bean has the size and skill set to be an intriguing prospect at the next level. He is a solid rebounder and with a very high release on his shot he can get it off over anybody. Bean can finish inside and can hit the 15-18 foot jumper.

Bryant Holmes, Exeter – Holmes is one of the region’s most dangerous long range shooters. He has in the gym range and if you leave him open he’ll make you pay. Holmes is expanding his game so he can also take his man off the dribble, set up his teammates and defend people well.

Matt Rizzo, Pinkerton – a combo-guard with a tight handle and a killer crossover dribble. Rizzo is very quick and can play the game at a fast speed, but at the same time is poised with the basketball and makes good decisions with it. He has a good pull-up jumper and can also hit the three.

Connor Walsh, Trinity – a savvy, fundamentally sound wing player. Walsh is crafty with the basketball with an array of dribble-drive moves to get by his man, as well as spins and fakes inside to score over taller defenders. Walsh can hit the outside shot and is a tough defender.

Brennan Morris, Pinkerton – Morris is a wing who has good length which allows him to get his hands on lots of deflections and also get to the rim from the perimeter with just one dribble. He is one of the state’s best spot-up shooters. He can knock down shots in bunches. Morris used to be just known as a spot-up shooter, but he has expanded his game, and is now just as dangerous slashing to the rim, defending or rebounding.

Josh Degrenier, Conant – A combo-guard and a winner. Degrenier is part of Conant – the most consistently winning basketball program in the NHIAA. He’s a smart player with good fundamentals and basketball I.Q. Degrenier can knock down shots from the outside or in the mid-range area – he has a good pull-up jumper and is good at moving without the ball to free up his shot.

Jaylen Leroy, Manchester Central – Just a tough kid and good all-around player. Leroy is only 6-foot-1, but plays much bigger. With his leaping ability and tenacity he is able to grab rebounds over bigger players and is quick to loose balls. Leroy can hit the outside shot, take his man off the dribble and crashes the boards well on both ends of the floor.

Matt Vartanian, Salem – the 6-foot-5 Vartanian has slimmed down this season, which allows him to play the game at a faster pace and keep up with quicker bigs. He already had a good motor and was a kid who always played hard every minute of the game. Vartanian goes hard after rebounds and loose balls. He has an improving post-up game and attacks the rim.

K.J. Matte, Lebanon – A scoring point guard who is also a very good passer. Matte is a quick guard who flat out makes plays, both for himself and for teammates. He has good court vision, sees the whole floor and can hit the open man. Matte knows how to run an offense. He also has the ability to hit shots off the catch or off the bounce and has an arsenal of dribble drive moves to get to the bucket.

D.J. Frechette, Nashua South – Frechette had a breakout season as a sophomore and could be in for a Player of the Year season in D-I this year as a junior. Frechette is as good a pure shooter as there is in NH. He has a killer pull-up jumper that he can hit from anywhere on the floor. Teams will probably double team him – if they don’t he might just drop 30 on them.

Jacob Coleman, Londonderry – Coleman was a big reason why Londonderry went undefeated last year en route to the Division I title. He hit a number of big shots – floaters in the lane or long range bombs. Coleman doesn’t turn the ball over and makes good decisions; he knows when to shoot and when to dish it. A smooth player, the game comes easy to Coleman. He has a good handle and is a tough defender.

Joe Glynn, Portsmouth – Glynn is another kid who comes from a winning program at Portsmouth. Glynn is a beast on the boards and is a strong finisher inside. He projects well as a four at the next level, with the ability to play with his back to the basket or face up. Glynn runs the floor well for a big and plays strong post defense.

Trey Carrier, Wilton-Lyndeborough – Carrier had a breakout sophomore season, and really came up big in Wilton’s title game win over Epping. On a big stage and with the pressure on he delivered, hitting turnaround jumpers inside, smooth mid-range pull-up jumpers and finishing in transition. Carrier is a versatile wing with good athleticism and leaping ability. He’s tough to contain off the dribble.

Sam Anderson, Derryfield School – a versatile big who has the ability to score inside with an array of up-fakes and post moves as well as face up and hit the jumper or take his man off the dribble. Anderson has good footwork in the paint, and has a very good handle for a big.

Colby Gendron, Bedford – Gendron is 6-foot-7 and can drain threes. He also has a high release, which makes his shot even tougher to defend. Additionally, Gendron has long strides which enable him to drive past his man and get from the arc to the rim with just one dribble. He’s also a tenacious rebounder. Gendron has committed to Brown for lacrosse, but if he keeps improving on the court he could play hoops there as well.

Shon Parham, Portsmouth – Parham is a tough point guard who doesn’t back down from anybody and isn’t afraid of pressure filled games or of taking the big shot. He is a lock down defender and knows how to run an offense. Parham is unselfish, always looking to find the open man but can also score if left open.

Cody Graham, Portsmouth – a scoring machine with a killer mid-range jumper and a tight handle. Graham moves well without the ball to free himself up for looks. He’s always looking to push the tempo, keep pressure on an opposing defense and finishes well in transition.

Cody Morissette, Exeter – another sophomore guard who can flat out score. Morissette can stroke the three or take his man off the dribble. He’s very quick and can score in bunches.

Ian Cummings, Merrimack – an athletic wing with a good inside/outside game. Cummings can score and rebound inside, but can also play out on the perimeter. He can slash to the rim or hit the open shot.