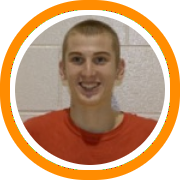 The highlight of the night for coaches and fans alike was the 8pm match-up between the New England Playaz and Expressions Elite.  The quality of play was extremely high for all 40 minutes of action as both teams left it all on the floor while playing an intelligent brand of basketball.

The St. Mark’s tandem of Erik Murphy and Nate Lubick led the Playaz in the scoring column with 22 and 15 respectively.  But with Lubick stuck on the bench in the game’s final minutes with a groin injury, it was Murphy who was the difference as he scored the last four points of the game while also picking up several crucial rebounds to lead the Playaz to a 78-71 victory.

Tucker Halpern scored 16 points to lead Expressions as he continues to bounce back in a big way this summer.  Greg Jacques scored 12, including two big three-pointers in the final four minutes of the game to keep his team close.

The Playaz fought off a fired up Connecticut Hoopstars team in their first match-up of the day.  The Hoopstars held an 8 point lead in the first half behind a very disciplined offensive attack and some spectacular shooting from the perimeter.  Tyler Burkhart (14 points, 4 three-pointers) and Matt Landry (15 points, 5 three-pointers) led the way from the perimeter while Matt Stone and Jefferson Lora (8 rebounds a piece) did their best to match-up with the interior tandem of Murphy and Jordan Williams.

But it was Williams who was the dominant player in this game as he scored a game high 20 points and was a consistent presence on the block throughout the 40 minutes.  Naadir Tharpe had 15 points and a handful of assists as his spectacular summer continued.  Murphy finished with 14 and Austin Carroll 13.

Expressions Elite began the day in commanding fashion as they ran away with their mathc-up against Upstate Basketball.  It was a well balanced team effort as Expressions was clicking on all cylinders with just about everyone playing well.  Kyle Casey had 14, Luke Apfeld 13 before heading to the sidelines with a leg injury, Halpern 9, Kellen Cade 8, and Corey Wright Jr. 8.

The Rhode Island Hawks had a big day as they knocked off both New York Elite and New Jersey Cyclones.  Andrew McCarthy, Sam Martin, and Alex Berthiaume led the way in both contests.  McCarthy dominated New York Elite’s 7’5” big man Ring Ayeul by pulling him away from the basket with his shooting range and scoring 20 points against only 5 for Ayeul.  Martin had 15 points, including 4 three-pointers, against Elite while Berthiaume ran the show with 12 points and a good amount of assists.  Az Khan and George Beamon led the way for Elite with 20 and 16 respectively.

The again relied on their talented three-some to overcome a 17 point first half deficit against a very good New Jersey Cyclones team who had advanced to the semi-finals of the Joe Brown Tournament only a day earlier.

CBC’s senior team also went 2-0 on the day, defeating Upstate Basketball and the Westchester Hawks.  Dominique Langston led the way with 24 against Upstate, while Adrian Satchell had 18.  Josh Turner led the way for Upstate with 17 points.  The roles reversed for the next game as Satchell was the game’s high scorer with 24 while Langston had 19.  Steven Samuels was consistent in the backcourt in both contests with 13 and 14.  Lenzie Harrison and Greg DeSantis did some nice things in the Westchester backcourt as Harrison was all over the ball on the defensive end of the floor and knocking down some perimeter jumpers, while DeSantis continued to show a pure shooting stroke while also making good decisions with the ball.

The Hawks squeezed by Metro Boston in their first game 56-50.  Metro had a very balanced attack throughout the day, especially in their backcourt.  Willie Lyons finished with 11 against the Hawks and 12 against United Brooklyn, while Shabazz Napier had 12 in the first game and 10 in the second.

Playing without their star guard Akeem Williams, the Warriors did their best to bridge the gap, but ended up falling in a hard fought battle to the Philly Patriots 75-73.  The Warriors got great production out of their deep frontline as Scott Anderson had 16, Nicco Demasco 15, Peter Lynch 14, and Boston College High School’s Colin Halprin 13.  But it wasn’t enough to overcome the performance of Adam Ahern, a 6’5” forward from Avon Grove in Pennsylvania, who finished with 36 of his team’s 77 points.

Anderson put up another 16 against the Connecticut Flame, while James Ridriguez chipped in with 10.  The Flame were led by a very impressive performance from Jason Mendell who scored 21 points including four makes from behind the three-point line.

In their second game the Flame scored an overtime victory over the Boston Soldiers.  6’0” senior guard Jonathan Herzog was the hero of this contest as he scored 6 points in the extra period to boost his squad.  Matt Gibson scored 16 points, knocked down four threes, and had a ton of assists for the Soldiers.

The Soldiers won their opening contest against the Philly Patriots as Romeo Diaz paced the group with 16 points.  Diaz, who is apparently headed down south to attend prep school, was showing his full repertoire of drives, spot-ups, and pull-ups.

MBR was victim to a very tough schedule as they fell to the New Jersey Cyclones and New York Elite.  Nevertheless, some of their players still managed to do well for themselves.  Even in defeat, Thomas Knight still may have convinced some Atlantic 10 coaches that he is capable of playing at that level.  Keegan Hyland hit three three-pointers in each game, but played a much better game against NY Elite.  The same can be said for Lee Suvlu who finished with 13 and 17 on the day.

6'7" swingman Michael Bersch led the way for the Cyclones scoring a game high 28 points.  6'3" guard Isaiah Wilkerson and 6'1" guard Brandon Cohen chipped in with 15 a piece.

Lone Wolf fell to Connecticut Basketball Academy, but bounced back to give CBC 2010 all they could handle before falling by 4 points.  Jon Goldberg had 10 points and 10 assists while showing he was capable of making big plays at the end of the game, while Nick Meunier scored a game high 20 and D.J. Campbell shot his way to 14.