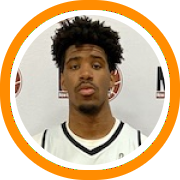 The Be Seen Tour rolled through the Garden State recently to see the New Jersey Panthers, a program that has only been in existence for three years and yet already established itself as one of the best independent organizations in the northeast.

What we saw that night only reinforced that belief. There was tremendous depth, with 20+ players in the class of 2022 who are all capable of playing at the next level. More than that though, there were prospects for all levels of college basketball – D1, D2, and D3.

Finally, the team was as well-coached as they were well-organized with a competitive practice that both showcased their players’ abilities and also created the type of environment necessary to foster development.

The only unsigned senior in the gym was Immaculate Conception’s Jayden Brown, a player we had already spotlighted in the NERR-TV virtual showcase. Brown is known as one of the most skilled shot-makers in the state and he lived up to that reputation, both during his senior campaign and since joining the Panthers this spring. He’s a scholarship caliber talent who remains on the board in 2021 but is also contemplating a move to the prep ranks for next season.

One player who has already solidified his prep plans is Aidan Kehoe, a 6-foot-10 big man who will head to Canterbury School, providing head coach Brian Baudient with his latest D1 caliber big man up front. The Pascack Hills product has tremendous size and the build to match with a game that is bound to attract college coaches sooner rather than later.

Kehoe is one-half of a “twin towers” of sorts for the program and his partner in crime is Mark Woolhouse, a 6-foot-9 big man from Pennington School who came close to ripping the rim down on more than one occasion and has a very clear upside.

The Pennington connections run deep within the Panthers program. Phil Urban is a 6-foot-6 wing who is absolutely explosive, especially in the open floor where he is a highlight reel waiting to happen. Ethan Pires is one of the program’s top overall prospects and most versatile players with a terrific combination of perimeter size, strength, and skill.

Rutgers Prep’s Ryan Pettit is the heart and soul of the team. He’s a game-changing defender and obvious leader with a balanced offensive game and a wealth of intangibles. Delaware Valley’s Logan Blake is an equally impactful contributor along the frontline, both as a double-double threat but also as someone who can stretch the floor.

There’s also a full compliment of potential sleepers, beginning with Ethan Simmon. The St. Joseph’s Metuchen guard has perimeter size, a strong frame, and one of the best shooting strokes in the program. Rutherford’s Pat Rogers is a budding stretch-four type who only needs his body to catch up to his skill-set. Billy Anderson is a similar skilled forward, but he’s also a southpaw with a crafty floor game and exceptional footwork. Daniel Boateng has the requisite size, body type, and skill as well…and only needs to put it all together on a consistent basis.

They even have a couple of rising juniors playing up a year in Darrius Phillips and Matt Kinzler. Phillips has the full compliment of physical tools with size, power, and athleticism alike, while Kinzler is an ideal compliment because of the versatile tools he has with the ball in his hands while he continues to fill-out physically.

Not every stop on the Be Seen Tour is the same. Each offers positives or new insights in one area or another, but few have exceeded our expectations as much as the Panthers this spring and that’s a tribute to the people building the program behind the scenes – Zach and Ryean Liu along with Ryan Shellhammer and Bill Rooney among others.