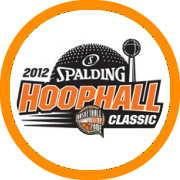 The 2012 Spalding Hoophall Classic got underway on Thursday and after two days of local action on both the boys and the girls side, Saturdays match-ups will begin three days of national competition of the highest quality.

Central Catholic 72  Springfield Cathedral 62: With senior guard Luis Puello out with a sprained ankle, sophomore Tyler Nelson played a starring role for Central Catholic, scoring a team high 19 points on five three-pointers, including a dagger long ball in the game’s final minute.  Shawn McCoy, Joel Berroa, and Doug Gemmell also finished in double figures while Cathedral was led by Lou Garcia’s 23 points on five three-pointers of his own.

Mahar 69  Hampshire 43: Phil DePhillipo was a model of efficiency, going 12 of 17 from the floor en route to a 25 point performance for Mahar as they ran away with a lopsided victory in a Western Mass clash.  Keith Cotnoir led the way for Hampshire with 18 points and 7 rebounds.

New Leadership 63  Sabis Charter 52: Joseph Crapps and Stephen Jackson took a combined 37 shots for New Leadership as Crapps finished with 24 points along with 18 rebounds and Jackson 16 and 6.  Nelson Zayas scored a team high 21 for Sabis but struggled to get it going from the field, shooting 8 of 23 including 4 of 14 from three.

12:00pm – Springfield Central (MA) vs. Windsor (CT): Central returns for their second game in what promises to be a steeper challenge against an undefeated Windsor team from Connecticut.  The Warriors have a variety of weapons with Garey Allen and Andy Hurd in the backcourt, Jared Wilson-Frame on the wing, and Jaquan Harrison up front.

2:00pm – St. Patrick (NJ) vs. LaVerne Lutheran (CA): A battle of east vs. west as St. Patrick is led by Jared Nickens and DeAndre Bembry against a LaVerne squad that features the 9th ranked prospect in the country in Grant Jerrett, who is already committed to Arizona.

4:00pm – Gonzaga (DC) vs. Riverside Academy (LA): One of the nation’s best uncommitted big men, Ricardo Gathers, leads a Riverside squad up from Louisiana as they take on Gonzaga High School and their junior point guard Nate Britt, who is already committed to North Carolina.