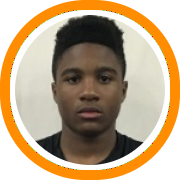 Worcester Academy’s Quest Harris stood out as perhaps the most impactful player in the group. Dubbed “the best player on the floor” by one coach and praised by another for “scoring and getting into the lane at will,” part of what made him so impressive was that he was a two way player who showed he could make just as many plays on the defensive end.

New Hampshire native and Proctor Academy freshman Bol Akot is another top guard in the class. He’s both quick and fluid with the ball in his hands, but also has some naturally crafty instincts that allow him to be a high level playmaker. His stroke is also solid though so there is a well-rounded and versatile foundation to continue building off of.

Suffield Academy freshman Jalin Sinclair, who is originally from New York, also distinguished himself as one of the best guards in the class. He’s got that prototypical NYC style toughness and chip on his shoulder to go along with a pretty strong early body, good quickness off the bounce and a high skill level at a young age.

Here’s a look at some of the other 2020 guards that stood out:

Kurtis Henderson, Catholic Memorial – He’s a bully, but in the most complimentary way possible. A powerful, aggressive and competitive point guard, Henderson plays with an attacking mentality and asserts his will onto the game like few others in his age group.

Dallion Johnson, Phillips Academy – A big combo-guard, Johnson is both smooth and skilled. He shoots the ball well from long range but also mixes in his fair share of pull-ups and floaters. As he continues to fill out and develop athletically, he has a chance to develop into a true three-range scorer.

Darius Ervin, Northfield Mount Hermon – The younger brother of former NMH and current UMBC guard Daquan, Darius is an undersized scoring guard at the moment, but one who can get buckets in bunches, especially with his jumper.

Nazhur Kenion, Taunton – An explosive guard who shows the makings of being a three range scoring threat, Kenion has the burst to get to the rim at any time, a high release in the mid-range area and good mechanics on his perimeter jumper.

Jarnel Snow Guzman, St. John’s Prep – He might be undersized but he has a high I.Q. and ability to make others better. He threw a couple of very high level passes, generally distributed the ball well, showed a high basketball I.Q. and was even a willing screener when the ball wasn’t in his hands.

Dominic Mello, Wareham - Mello is a southpaw guard with a creative handle and ability to break defenders down with the ball in his hands. He’s crafty with both hands around the rim and capable of making tough jumpers from the perimeter.

Bryant Ciccio, Attleboro – This guard is highly skilled with the ball in his hands at a young age. He has cross-overs, combination moves and even fake spins when breaking defenders down off the dribble. He can get all the way to the rim, deliver high level passes off the bounce or stop quick for his pull-up as well.

Omar Peralta, Commerce – He’s very undersized right now but he’s a growth spurt away from making some waves. He plays with good energy, is absolutely fearless, has active hands defensively and can really shoot the ball.

Jamall Griffin Jr., Catholic Memorial – A two-sport star who also shines on the gridiron, Griffin brings the same competitive spirit and hard-nosed approach with him to the hardwood. He’s an aggressive and pesky defender, tough on both ends and full of winning qualities.

Bensley Joseph, Arlington – Joseph is a lead guard who looks to attack off the dribble. He’s got plenty of shake with the ball in his hands and the body type to hold off his defender once he gets him on his hip. He also showed good body control as a finisher.

Makarios Russell, Redemption Christian – The lefty point guard is tough, sees the floor extremely well and finishes through contact. He can sometimes defer to the RCA veterans with his high school team, but seized the opportunity to be more assertive at the Elite 75.

Elias Delaire, Granby – The younger brother of Jaiden from Loomis Chaffee, Elias hasn’t yet hit that same late growth spurt but you can see it waiting to happen on his frame. He’s a good athlete and solid two-way player whose game could be on the verge of new levels.

Jay Bosch, Manchester Central – He may be undersized at the moment, but he played as hard as anyone in attendance and got everyone involved as the point guard of his team. He ran the show, distributed and pressured the ball for the length of the floor defensively.

Nate Siow, Lowell – He too is a little undersized but he’s tight with his handle, quick off the bounce and a natural talent with the ball in his hands. He change a change of pace game and also made sharp changes in direction.

Jahcyrus Lawrence, Waterbury – An intriguing guard who is far from a finished product, Lawrence has clear ability with the ball in his hands and a lanky frame that shows definite upside as he continues to fill out and develop physically.

Will Dorion, Needham – Dorion showed a good skill set at a young age – handling, passing and shooting the ball effectively – now it’s just a matter of his body catching up which is bound to happen in the coming months and years.

Jake Barisano, Westford Academy – He stood out as a good long distance shooter who heady with the ball and has a high basketball I.Q. – a pedigree which translates well to higher levels.

Myles Avalon, Brookline – One of several talented youngster from the Brookline program, Avalon looked the part of a heady two-guard who had a sense of spacing and timing, was a precision passer and a workhorse type defender.