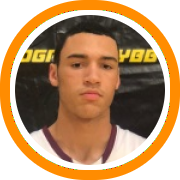 Sunday was an intense day at the Elite 75 Camp for rising 9th - 11th graders. Campers got going first thing in the morning with advanced concepts as they learned to break down the pick-and-roll and how that could flow into drive and kick action when the floor is spaced properly.

Players were then able to carry those principles over to game play, with three sets throughout the day, followed by a lecture on accountability from NMH head coach John Carroll.

Here's a look at who stood out on Sunday:

Jay Dieterle, 6'3, Rivers 2020 - A high I.Q., volume scorer who always seems to play within himself even though he's just a rising 9th grader, Dieterle has the size and skill set so that he should have a bright future in the prep school ranks for the next four years.

Tyler Murray, 6'4, Tiverton 2018 - As he continues to add strength to his long frame, Murray projects well because he runs the floor, gets his hands in passing lanes, and has deep range.

Dan Schlakman, 6'6, Milton 2019 - Schlakman is a high IQ player who plays hard. With his height and court vision he makes good passes from the perimeter and in the post when getting doubled. Showed his versatility by scoring in the post and knocking down the long ball.

Connor Raines, 6'5, Notre Dame West Haven 2019 - Raines is a high IQ, good sized wing who competes at a high level and makes shots from all 3 ranges. With his knockdown shooting ability, defenders close out hard on him and that allows him to blow by defenders and elevate, then finish with authority.

Gob Gob, 5'10, Memorial 2020 - The cousin of Wenyen Gabriel, Gob looks like he remains some distance from his eventual height. Gob handles the ball extremely efficiently and was hitting step back shots and one dribble pull-ups after blowing by defenders.

Tyler Burton, 6'3, Mariannapolis 2018 - Burton continues to get better and better every time he hits the court. Had arguably the play of the day Sunday with a blow by, high level, posterizing dunk. With his continued development and strength, Burton should be one to watch this summer and next year.

Aireus Raspberry, 5'11, Cranston East 2019 - He has a tight handle and good feel for the game as a lead guard. Raspberry is best in the open floor where he can use his strength, athleticism, and court vision.

Rowan Niemela, 6'2, Jaffrey 2019 - Niemala can certainly create for himself and others off the bounce. With great athleticism and length, Rowan should be one to watch as he continues develop his already solid skill set.

Jack Tierney, 6'6, Darien 2018 - Tierney is a long player who with some more strength should be an intriguing prospect in the next year. He already has a nice skill set and competes on both ends of the floor.

Chris Stineman, 6'7, West Seneca East 2019 - An old school big who looks to bury defenders deep in the post and can finish over either shoulder, Stineman was efficient and productive all day long.

Angelo Stuart, 6'1, Bedford 2018 - A flashy guard with a flair for the dramatic, Stuart threw on point behind the back passes and made a variety of plays in the open floor.

Will Spencer, 5'9, Trinity 2020 - A small guard who can create his own shot and knock it down over taller defenders with a smooth stroke.

Quentin Harris, 6'0, Belmont Hill School 2018 - A nice combo guard who can play both on and off the ball, Harris makes shots in bunches and shows great court vision.

Evan Cook, 5'9, Groton-Dunstable 2019 - Cook is a point guard with a high I.Q. who gets into gaps, reads the defense extremely well and has a versatile attack as a result.

Jarrett Martin, 6'1, Catholic Memorial 2018 - Another point guard prospect, Martin has good size for the position, plays hard and understands how to run a team by getting his guys in the right places.

Antal Lee, 6'4, Too Bate 2019 - A swingman who is capabale of playing either the two or three spots, Lee has good size for the perimeter and an ability to knock down shots from deep.

Jackson Meshanic, 6'6, Kingswood Oxford 2018 - The big man has good offensive tools around the rim but the skill to step out to the perimeter as well. Defensively he blocks shots and grabs rebounds, both while showing deceptive athleticism.

Tariq Eubanks, 5'8, Buffalo Academy of Science Charter School 2021 - A lightning quick guard who changes speeds extremely well, Eubanks is best in the open court but can also blow by guys one-on-one and get to the rim.

Brandon Borde, 6'0, Foxboro 2020 - A strong lefty with a physical floor game, Borde gets to the iron by using his strong frame and finishes well through contact.

Marc Dolgin, 5'11, Milton 2019 - Dolgin is a high energy lead guard who aggressively probes the defense and looks to make plays but can also space out opposing defenses with his knockdown shooting ability. He also offers a wealth of intangibles.

Eamon Fitzpatrick, 6'2, Hopkins 2019 - Fitzpatrick lit it up from deep in the night game, nailing 4 threes and finishing his spinning drives with athleticism.