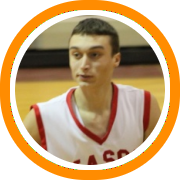 Masconomet rising senior guard Adam Bramanti brought his recruitment to an early end when he made a verbal commitment to Stonehill University earlier this week.

“I just felt really comfortable,” Bramanti said.  “I had been up there five or six times and it was kind of an easy decision.”

Bramanti is a highly skilled guard who was expected to generate division I interest this summer.  Regardless, he said he saw no reason to drag the process out any longer.

“I wanted to see what D1 looks I might be able to get but I also wanted to stay close to home,” he said.  “In my mind I really wanted to go there.”

While this may be an earlier conclusion than most were expecting, Stonehill had been recruiting Bramanti hard for a long time now.

He took his first visit to the Easton, Massachusetts campus in the fall, returned twice to see the team play during the regular season and made his most recent trip on Tuesday when he gave head coach Dave McLaughlin his verbal commitment.

“I thought Coach McLaughlin did a great job recruiting me,” Bramanti said.  “He never pressured me and said he would wait until I was ready.”

McLaughlin’s patience paid off as he landed a player with a long history of success on both the high school and AAU circuits.  He was the Player of the Year in the Cape Ann League this season and has also been one of the pillars of the New England Storm program in recent years.

Last summer, Bramanti also stood out as one of the surprise standouts at the New England Elite 75 Showcase.

A very skilled combo-guard who is equally effective playing on or off the ball, Bramanti said he expects to see time at both positions upon his arrival at Stonehill.

“That was one of the first things they said they liked,” he explained.  “I’m not just a one or just a two.  I can play both.”

A talented shot-maker with a consistent pull-up game to match, Bramanti also sees the floor, passes well, and has a high basketball I.Q.  He’ll be expected to make an immediate contribution upon joining Stonehill in the fall of 2012.