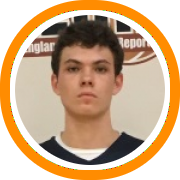 The fourth and final part of our series on the best available prospects left in New England’s class of 2018 focuses on the backcourt. The same theme continues to hold true as the deep collection of talent in the region this year allows for a variety of prospects to be left on the board who are capable of helping college programs at a variety of levels.

Much like the forwards though, guards can fill a variety of different niches in today’s game. The most endangered species of the bunch if the prototypical point guard who plays with a pass-first style and understands what it means to run a team. The more modern day lead guard runs the show but with more of an attacking mentality. There's still some throwback style two-guards out there who play exclusively off the ball while combo-guards are equally capable of playing on or off the ball.

Jonas Harper, St. Luke’s – With a college ready body and a game that has gone to new levels this year, Harper might be the best of the combo-guard bunch. He plays through contact, is a much improved shooter, gets good elevation into his release, can defend, and is a better passer and ball-mover than he often gets credit for.

Ian Krishnan, Proctor Academy – A former two-sport athlete who brings a grid-iron like approach to the hardwood, this Maryland native isn’t just competitive, he’s also skilled as he can rain in threes from behind the arc with the best of them.

Derohn Mitchell, St. Thomas More – D.J. is built like a point guard but plays with a scorer’s mentality. He’s highly skilled with the ball, able to gets buckets in a number of ways, and was one of the most pleasant surprises, not just at STM, but in the entire prep ranks this season.

Tyler Bourne, Notre Dame Fairfield – The New York native spent the last two years in Connecticut and left with a state championship to his name. He’s an undersized jitter-bug style point who has complete command of the ball, the moxy to hang with anyone, and a good instinct for how to make his size, or lack thereof, work to his benefit.

Everette Hammond, St. Thomas More – A good size guard who came to the prep ranks to prove he could evolve into a legit big point guard, Hammond did just that while also carving up his physique. His size, reliable decision-making, and ability to knock down open shots are all attributes that translate to the next level.

Malik Zachary, Springfield Commonwealth – It was an up and down, injury plagued, season for Zachary but his highs were enough to intrigue programs from the Atlantic 10 and MAAC among others. A playmaker with the ball in his hands, he has burst and physicality off the bounce, and with added consistency he could be a potential steal at the right level.

Anthony Cooper, South Kent – He’s an over-achiever in the most positive and complimentary form of the word. Cooper put up huge numbers down the stretch of the season and became the face of a South Kent program that completely changed the narrative from the beginning of the season by relying on previously unheralded players.

Mike Speight, Canterbury – A former High Point commit in the class of 2017, Speight is a combo-guard by definition but probably most naturally suited to play off the ball where he can maximize his shooting stroke. He’s capable of sliding over to the point though and is much underrated as both a decision-maker as well as an on-the-ball defender.

Tyler Arbuckle, St. Paul’s – The southpaw was one of the most dangerous playmakers in the CIAC this year as his ability to break down his man and collapse an opposing defense was second to none. He’s skilled enough to score the ball in different ways and can make plays for his teammates when attracting a second defender.

Sebastijan Skoko, Vermont Academy – With a second D1 offer now to his name, Skoko has his choice of pursuing his athletic aspirations or a degree from a world-class academic institution. On the hardwood, he’s put up huge numbers in AAU as a playmaker while simultaneously building up his body and developing his skill set and shooting stroke.

Isaiah Gaiter, Sacred Heart – He put up massive numbers this past season as a senior and yet still is just scratching the surface of his natural talent. The southpaw has great positional size, instincts, passing touch, and feel. With added conditioning, consistency, and efficiency his best days are definitely still ahead.

Luke Hicks, Cushing Academy – There might not be much flashy about him but he’s as reliable as you get, and that makes him a luxury for college coaches. He’s very smart, a high percentage spot-up shooter, and overall heady player with a mistake-free style.

Cam Gooden, Putnam Science – He’s a little undersized but compact with a strong core. Gooden shoots it well both from behind the arc as well as with his pull-up but can surprise the unsuspecting coach with his ability to rise up, both around the rim as well as into his release.

Chuka Mekkan, Bridgton - He went from Portland, Oregon to the greater Portland, Maine area. He's an elite defender who has developed his point guard skills this year and also ranks among one of the best overall leaders the Wolverines have seen in recent years.