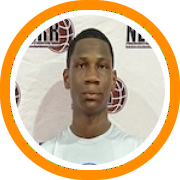 This is a program with long-term aspirations as their roster is filled with youngsters who are loaded with signs of potential.

Caleb Middleton, who will be joining New Hampton’s class of 2024 next year, was the first player to catch our eye. He has a terrific early combination of size, skill, and fluidity. He runs and moves well for someone his age who is already every bit of 6-foot-9. The versatility in his skill set is very intriguing as well. He can step out and make threes, put the ball on the floor, and score inside with baby hooks and good footwork. In short, he’s bound to be one of the top early prospects in next year’s freshman class.

Another incoming freshman with clear potential is Nyzohn Small from Academy of the Pacific Rim. The 6-foot-5 forward is uber-long with big hands, feet, and a ton of physical upside. While he’s just starting to learn the fundamentals of the game, he showed the motor necessary to keep improving at every step. He was fully engaged, attentive to coaching, and seemed to really love the game. Those attributes, combined with his physical gifts, make him another 2024 prospect with a very high long-term ceiling.

In the class of 2023, John Kallon was particularly impressive. Again, he’s far from a finished product, but he’s a budding big guard with good size, pace, and smooth playmaking potential. He’s going to have to keep developing his shooting mechanics and learning how to play the point guard position, but his natural ability is clear and he showed some flashes of high-level plays throughout the practice.

We also got our latest look at Donald Villard and the young big man has continued to emerge physically. He’s reportedly grown another two inches, measuring in at 6-foot-11 with a 7-foot-2 wingspan, while also starting to fill-out. He’s still very raw and in the very earliest stages of his development, but with those types of measurables he’s going to be a prospect worth monitoring closely for years to come.

Mazen Ebik, a rising sophomore at Fenway High School, was one of the most impactful players in the gym. He’s 6-foot-3, already physically strong, and also skilled. He shot it well off both the catch and the dribble and so he’s as advanced with the ball as he is physically at this still early stage.

Jalen Moore was the most pleasant surprise in the gym. He doesn’t have the same early hype or the body type that is going to jump out at anyone, but his feel for the game was the most instinctive of the bunch. He was fundamentally sound with good early skills and the fluidity to match.

David DeSouza, who plays for the same Everett squad that his coach once did, is another skilled lead guard with an added dimension of physicality. He’s compact and strong but also good with the ball and reliable running the show.

Geo Goncalves, from Roxbury Prep, is a guard with a bit of extra explosiveness. He’s quick with a cut-up frame and attacking mentality that allows him to make plays on both ends of the floor.

Up front, Riad Benagour is a 6-foot-9 big man with a very soft touch, not just inside the paint but even facing up from the perimeter.

Overall, this is a group that both individually and collectively are in their infant stages. It's a brand new program designed to give these very talented youngsters an opportunity to reach their potential and the future could be bright for all parties involved.