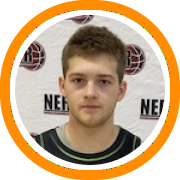 Black Bear North, or BBN for short, has been a mainstay in the state of Maine for over a decade now, helping to young players to both develop and then earn exposure to college coaches.

Last Sunday, they hosted the latest stop on the Be Seen Tour, allowing us to check on some prospects we already knew to be among Maine’s best and others we weren’t yet aware of.

Here’s a recap of who stood out:

Jacob Farnham, Mt. Blue – Probably the most impressive long-term prospect in the program’s senior class, Farnham is a long way from a finished product but already a very dangerous three-point shooter. He has good perimeter size, a frame to keep growing into, and was able to heat up in a hurry. While he plays with a scoring mentality here, he also zipped in some passes, and reportedly runs the point for his high school team.

Payton Jones, Thornton Academy – He just had an extra gear beyond most others in the gym. Jones with quick and athletic with an aggressive playmaking mentality. He was able to get downhill in the open court, had a solid first step in the half-court, and made enough jumpers to keep his defender honest.

Patrick Raymond, John Bapst – Listed at 7-feet, Raymond may be a hair under that in reality, but his sheer size is nonetheless a game-changer, and on both ends of the floor. He was fully engaged, willing to be verbal, and even had a soft touch to develop. As he continues to work on his mobility, footwork, and interior fundamentals, his impact will only increase.

Jeremy Fraser, Camden Hills – He stood out with his shooting stroke and perimeter size. The ball comes off his hand very cleanly, and when he was able to set his feet, he drilled open threes. He even made a tough one, jabbing at his defender to create separation before firing. While he has a clear niche now, he needs to continue to develop his ability to attack close-outs.

Cayman Zephier, John Bapst – One of the most athletic guards in attendance, Zephier had good speed in the open floor and fluid leaping ability to match. There was just an extra level of explosiveness to his game beyond anyone else at his position, except for Jones. He looked like a consistent jumper away from playing at the next level.

Jax Lin, Washington Academy – He was a name we hadn’t heard before but he stood out with his ability to run the show. A true point guard, Lin was good with the ball and one of the better overall passers in the field who just seemed to make the right pass at the right time.

Timur Sabic, MCI – The Croatian native was one of the best shooters in the gym with a smooth natural release and good understanding of how to use the entire floor, especially the corners, to space the floor. He made some crafty lay-ups at the rim but will take his game to the next level as he continues to diversify his attack and learn to play through contact inside the arc.

Brayden Cole, Hampden Academy – Cole was skilled with good size and a solid build. He shot it well from behind the arc, was valuable spacing the floor offensively, and should have some defensive versatility to match.

TJ Henaghen, Hampden Academy – The best long-term prospect in the gym. The 6-foot-8 forward is young for his class and should really just be starting his sophomore year. He’s got good shoulders and a frame that he’s only just beginning to fill out. Dubbed “Keith Van Horn” by his coaches, Hanaghen has that type of inside-out potential down the road with very good hands, solid athleticism, and some face-up game to develop.

Ryan Clifford, Camden Hills – He’s not the type of guy who is going to wow you in a pick-up game or showcase setting, but in structure, he’s just a sheer winner. Clifford has good size, versatility, and a wealth of intangibles. He’s verbal, grinds inside for rebounds, and is able to be a scoring threat at multiple spots on the floor.

Brady Coyne, Falmouth – The latest Coyne brother to come up the ranks, Brady just carries himself like a player. He’s confident, but in a self-assured and authentic type of way that isn’t boisterous, and clearly has the respect of his teammates and competitors to match. He’s a three-range scoring threat at this level who made threes and pull-ups with regularity throughout the workout.

Aaron Newcomb, Brewer – Newcomb is the type of guy who may not jump right out at you but keeps impressing you more the longer you watch. He’s a gritty point guard who is a hard-nosed defender and smart overall player. He made shots, was able to create separation off the dribble with his cross-over, ran the offense, and even moved without the ball.

Hunter Curtis, Ellsworth – Physically mature beyond his years, Curtis is physically strong and aggressive. He has the power to go through contact off the dribble but was also dangerous with his pull-up game thanks to his ability to elevate into his release. He even showed some potential starting the break himself and handling the ball with his head up in the open floor.

Colby Smith, Brewer – Smith showed some intriguing tools and good potential once he puts all the pieces together. He’s long and quick, has good defensive anticipation, and shows some playmaking flashes offensively.

Andon Wood, Washington Academy – A strong-bodied true point guard, Wood ran the show from start to finish. He was a true distributor who willingly moved the ball, zipped in his passes, and showed good change of pace off the bounce.

Adam Savage, Skowhegan – One of the first underclassmen to stand-out, Savage has good size, length, and an already strong build. He was athletic enough to get up and finish plays above the rim and showed some budding versatility to match with some tough left-hand finishes and open jumpers when in rhythm from behind the three-point line.

Brady Saunders, Brewer – Mature beyond his years, Saunders stood out with his versatility and understanding of how to impact the game while playing within the flow of it. He’s a big guard with a solid early build who moves the ball, defends, had a clean stroke, and even made some crafty finishes.

Landen Gabric, Hampden Academy – Gabric is an intriguing young prospect to keep an eye on moving forward. He was athletic off two-feet, rising up to dunk with relative ease, and showed a nice touch on baby hook inside the lane. He showed some potential as a perimeter passer, snapping balls, and needs to keep extending his skill-set away from the basket.

Will Kusnierz, Dexter – There’s clear talent here with a good combination of early size and skill on the wing. The release was clean on his stroke, he had some handle in the open floor, and showed a soft touch on his pull-up game. As he fills out his frame and becomes more consistent playing through contact, his game will go to the next level.

Charlie Houghton, Drigo – The latest star from the house that Thomas Knight built, Houghton is a physically strong and versatile scorer who just has a knack for putting the ball in the basket. He has enough size and strength to body up with opposing forwards but the skill-set to operate as a third guard of sorts.

Madden White, Nokomis – He had a pretty strong body and soft shooting touch to develop, but was probably most impressive being crafty around the lane. He has natural poise in traffic and very good footwork, enabling him to make clever step-throughs and up-and-unders.

Finn Parmley, Medomak – He’s another intriguing long-term prospect because he has a solid early build but clear physical upside as he continues to fill-out. He showed some good touch and instincts around the rim but is still at his best from about 12-15 feet in right now.