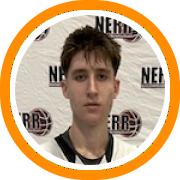 The Bay State Jags are a well-known program in New England…on the girl’s side.

They started with a 10u girls team back in 2003 and by 2009 they were producing 10+ college players on an annual basis. Since then, they’ve gone on to send players to places like Villanova, Northwestern, Providence, and Yale among others.

Now, they’re ready to make a similar name for themselves on the boy’s side as they’re utilizing the same blueprint and building with a group of talented young players anchored by an especially strong 2023 class.

Joe Nugent was a name that started to emerge this summer, and based on what we saw last week when the Be Seen Tour came to town, that’s going to be only just the beginning. Nugent is highly skilled. The southpaw shoots a beautiful, high-arching, ball from behind the three-point line, but has a well-rounded and mature floor game. He just knows how to play and can impact the game in versatile ways within offensive structure. What you don’t get a full appreciation for on film are his physical tools. Nugent has good perimeter size, a strong frame, and better mobility than comes across on the screen.

Trevor Mullin, the other important name to know in the program’s 2023 class, is an interesting contradiction. Even in person, Mullin’s physical profile isn’t going to wow you at first glance. The more you watch him though, the more his game probably will. He’s highly advanced with the ball and owns a unique combination of energy, creativity, and flair. He creates space and gets to his spots with ease, shoots it well, and is capable of throwing some high-level assists as well.

While Nugent and Mullin are the headliners, they’re hardly alone in the Jags’ sophomore class. Quinn Nielsen is another very intriguing long-term prospect. The 6-foot-9 big man has the requisite size and strength to be a factor inside. He’s also physical, willing to throw that big body around, and also pretty athletic for his size. He’ll debut at Brimmer and May this season and may remind some Gator fans of their former big man Ryan Canty.

Ryan Mela is maybe the most versatile player on the roster, and certainly one of the biggest mismatch problems. The 6-foot-5 forward has good size but his ability to handle the ball really differentiates him in the frontcourt. He’s equally crafty around the rim so while he can drive other forwards, and has all types of long-term potential playing off dribble hand-offs and from the elbows, he’s just as likely to flip in short shots around the rim.

Christian Abrams is the son of former Boston College star Danya Abrams, but a much different type of player right now, built in the mode of a big guard who is smooth with the ball and a true playmaking threat. He’s about 6-foot-1 right now, but if his size starts to catch-up with his dad’s, then he’ll be a rapid riser.

Catholic Memorial’s C.J. Dolison is a jitter-bug guard who may be undersized but knows how to make that work for him with a tight handle and ability to play underneath most opposing defenders. Jose Padilla and Sean Travis are two more quality pieces in the backcourt. Both are sound fundamentally with solid early skill-sets and budding shot-making ability.

Along the frontline, Braedan Donovan is a versatile prospect to keep an eye on. He’s a well-rounded athlete who also stars on the grid-iron but does different things on the hardwood with length, some face-up driving ability, and solid athleticism.

Patrick White is another physically talented young player who is well-build with well-rounded physical tools and an emerging overall skill-set. Milton Academy’s Wayne Simon has a good early combination of size and touch to keep building off of while Cooper Wright, Onyi Emekanwokeji, and John Egan are valuable components to the team as well.

Just as impressive as the individual players that make up this team, are the way in which they collectively operate. They’re well-coached but uniquely supported. In fact, this gym was like a who’s who of New England basketball with former Boston Celtics forward Brian Scalabrine taking part in the practice, former BC star Danya Abrams part of the coaching staff, and other former D1 coaches and players on hand to take in the action.

In short, this is a program that is already well-known on the girls side and fully on their way to making a similar mark on the boys side.