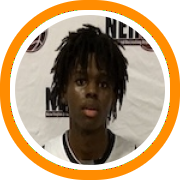 Friday night’s Connecticut Open Gym was the third event in a four-part series but it was unprecedented in terms of the amount of competitiveness and collective energy in the gym.

Guys went at it from start to finish and in so doing created a platform for numerous prospects to stand-out. By the time it was all said and done, a number of college prospects revealed themselves, some of which have the talent to play at the scholarship level.

After recapping the top seniors in the field yesterday, here’s a look at the top prospects in the class of 2021.

Tyler Dubose, Bridgeport Prep – Dubose might not yet realize just how much natural talent he has. There simply aren’t many up and coming bigs who can match his size, hands, touch, and floor-spacing potential. His conditioning has improved, but remains a work in progress, while the still untapped potential remains super high as his motor continues to rev up.

Blessing Agbonlaho, Taft – His size, athleticism, and mobility are all top-notch. He was the best rim protector in the field, regardless of grade, and his length and feet make him all the more potentially devastating on that end of the floor. Equally impressive was his motor as he was constantly competitive and active throughout the night.

Aedan Derrick, Southington – Perhaps the evening’s biggest 2021 stock-riser, Derrick is a young junior who is still just 15 years old but loaded with clear potential. He has good size at 6-foot-6, a strong body type with a solid base in his lower body, long arms, and naturally long strides and economy of motion.

Will Barton, St. Paul Catholic – The 6-foot-6 forward has a good combination of size, touch, and shooting potential. As he continues to fill out and polish his game, he has the potential to evolve into just the type of stretch forward that is coveted these days.

John Hypolite, Bridgeport Prep – A man among boys physically, Hypolite is broad, powerful, and physically dominant whenever he choses to go inside. While his drop-step was virtually unstoppable in the post, Hypolite has some budding versatility to his game as well.

Mason Jackson, Norwich Free Academy – With a division I offer already to his name, some juniors would have walked in the door with a sense of entitlement, but not Jackson. His energy level was a constant all night long as he not only showed the athleticism and shooting potential that has given him his early buzz but was also verbal encouraging his teammates, competitive, and totally engaged on both ends of the floor.

Kristopher Laing, Bridgeport Prep – A southpaw with a very intriguing upside, he has good size on the perimeter, very long arms, and a smooth handle that gives him a lot of playmaking potential. While he plays a drive-first style, he’s also not incapable of knocking down some open shots.

Gabe Charleston, Westminster – A long and athletic wing with broad shoulders and effortless bounce, Charleston has obvious physical tools but showed a pretty soft touch in the mid-range area and solid left hand as well. Overall, he looked like he could be on the verge of a clear ascension in the coming months.

Jalen Gordon, Capital Prep – An ideal utility guy, Gordon is 6-foot-3 with a strong body and very consistent motor. He plays bigger than he is around the paint, has good hands, and can both play and defend multiple positions.

Jaiden Gilzene, East Hartford – His night was unfortunately cut short by a rolled ankle, but not before he made his presence felt. Gilzene has good size and a strong body type, some face-up handle to develop, and great positional versatility on both ends of the floor.

Jahvon Myrthil, Holy Cross – A big bodied guard who is capable of playing all three perimeter positions because of his combination of size and strength, Myrthil not only uses his body type to his advantage but also shoots it well from behind the arc.

Jake Daly, Kent School – A budding big guard with great size at 6-foot-5 and the skill set to match, Daly is an intriguing long-term prospect because all the early signs are clearly there and he really hasn’t even begun to fill out his frame just yet.

Chris Hough, Capital Prep – A late-blooming guard who has grown at least five inches in the last two years and hasn’t even begun to fill out his frame, Hough showed clear potential, not just physically, but with euros through traffic and a clean shooting stroke.

Dereyk Grant, Wilbur Cross – The lefty guard showed an impressive skill-set with the ball as he had shake with his handle, range on his jumper, and was equally smooth attacking off the dribble or splashing jumpers from long-range.

Henry White, Simsbury – He possesses a lot of markers for future success. He owns a good physical profile and natural body type. The southpaw also has a solid foundation of skill to keep developing as he shot it well from three and showed signs of playmaking ability in the open floor.

Eli Blackwell, Amistad Academy – An energy-giver with an infectious approach to the gym, Blackwell is as verbal as he is engaged on both ends of the floor. A sparkplug style guard, he’s also quick with a good handle and capable of getting into the lane.

Ian Calabrese, Simsbury – The second half of what should be a formidable Simsbury backcourt for the next two years, Calabrese looked capable of playing on or off the ball, was sound with it in his hands, and capable of knocking down rhythm jumpers.