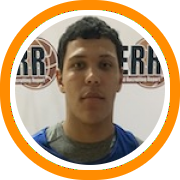 Friday night’s Connecticut Open Gym was the third event in a four-part series but it was unprecedented in terms of the amount of competitiveness and collective energy in the gym.

Guys went at it from start to finish and in so doing created a platform for numerous prospects to stand-out. By the time it was all said and done, a number of college prospects revealed themselves, some of which have the talent to play at the scholarship level.

We’ll begin our recaps by looking at the top seniors in attendance.

Chris Robinson, Westminster – Perhaps the most well-known prospect in the field, Robinson has a terrific combination of speed, power, and explosiveness. He’s well known for his prowess scoring the basketball and equally capable of defending the length of the floor. More subtly, but no less impressive, was his motor, endurance (he didn’t seem to fatigue at all), and humility. Put it all together and while he already had a strong reputation to begin with, he nonetheless still managed to raise the level of his profile.

Justice Ellison, Windsor – While Robinson was already well-known, Ellison was not. He put up huge numbers last year at South Windsor, including a 56-point game, but is now set to spend his senior year a town over at Windsor High School. If Friday night’s performance was any indication, he’s about to assert himself as one of the top players in the CIAC. Ellison is a big, power guard with broad shoulders and a strong body. He excels at getting downhill with the ball in the open floor but is also especially adept at changes his speeds in the half-court and then muscling his way to his spots.

Kazell Stewart, Prince Tech – One of the most explosive pure athletes in all of New England, Stewart plays the game as if he were on a trampoline and has the body type to match with endless defined muscle mass. While Stewart’s physical potential is virtually limitless, he also demonstrated some underrated skill in this setting. He raises up into jumpers but then fires with pretty soft natural touch and rotation. He also made a couple of plays off the dribble and showed a ton of versatile tools to develop on the defensive end of the floor.

Akili Evans, Holy Cross – One of the top players in the city of Waterbury, Evans demonstrated why scholarship programs need to be paying attention to him. He’s a lanky scorer with good perimeter size at 6-foot-4 and a frame that is still fairly undeveloped. A volume bucket-getter who can get his own shot at various levels, Evans was smooth off the bounce, able to make shots off the dribble, and finish with a unique combination of length, body control, and dexterity.

Kyle Hartley, Amistad Academy – One of the most pleasant surprises in the field, Hartley made his presence felt early and didn’t leave until he had proven himself one of the top guards in attendance. The lefty has good positional size, upside to his frame, the ability to finish with both hands, and a budding weapon in his three-point stroke. He not only made shots, but made tough shots, creating space with his jab step before drilling long-balls.

Aaron Latham, Taft – A Glastonbury alum, Latham looks poised to have an immediate impact at Taft in his post-grad year. His basketball I.Q. and feel for the game are both very impressive. He just owns a very mature floor game complete with various heady passes, great use of both hands, and a competitive, scrappy mentality.

Jaden Cook, Danbury – A very solid two-way guard, Cook distinguished himself on the defensive end of the floor first and continued to emerge offensively throughout the course of the night. He had burst off the bounce late into the evening, as others began to suffer from heavy legs, showing good speed from end-to-end and a complimenting drive-and-kick game.

Nick Bray, Suffield Academy – The Suffield Academy post-graduate and Kingswood-Oxford alum showed quick wheels, an unselfish approach, and a balanced floor-game as he made high-arcing jumpers from three, attacked both sides off the dribble, and distributed the ball well.

Chris Cahill, Guilford – The Hamden Hall transfer should provide an immediate boost in the SCC and CIAC as he is skilled and a talented offensive player who should be capable of putting significant points on the board from day one.

Chuck Clemons, St. Luke's - Just what you would expect from a coach's son, Clemons tough with a high I.Q. He is a quick guard who can absorb contact and thrives with his ability to still get to the rim, but can still create for others.

Jayvon Chapman, Hamden – Chapman is a lefty guard with a strong and compact build, good burst off the bounce, and the ability to create pace. His attacking mentality was immediately evident and he was a playmaking threat from start to finish.

Regan Burke, Holy Cross (NY) – A big, physical guard who made the trip from New York for a chance to earn some additional exposure, Burke used his body well to seal off opposing defenders, initiated contact, and used his strength to work his way into the lane.

Rafael Carton Charfole, Westminster – A 6-foot-7 post-grad from Spain, Carton Charfole impressed with his strong body and versatile attack. The big-bodied forward got downhill at every opportunity in the open floor, sought out contact, but also showed a soft touch from behind the arc. He also rebounded the ball in high volume.

Niko Bossinakis, Suffield Academy – Physically strong with a high-motor and equally high basketball IQ, Bossinakis was equally mature with his body, floor game, and understanding of how to play. He defended with a purpose, moved the ball well offensively, and made a number of plays that translate to the next level.

Cinque Robinson, Storm King – The undersized big man plays with a high-motor and rugged approach. He has a great nose for the ball off the glass, blocks shots around the rim, runs the floor well, and has good hands to make tough catches.

Egan Foye, Somers – His size is a game-changer inside the lane, and likely a dominant factor in the NCC. Foye was a consistent presence, on both ends of the floor, inside the paint as he finished plays, contested shots defensively, rebounded, didn’t shy away from contact, and showed solid hands and touch.

Heston Tucker, Hamden – Tucker is a strong-bodied forward who has improved his conditioning in the last year to become as explosive as he is powerful. He played above the rim with force, was impactful as a straight-line driver, and projects as a versatile defender.

Jahkai Pettway, Hamden Hall – Pettway has vastly improved over the course of the last year. He’s leaned out his frame and gotten into the best shape of his career while maintaining his power. Simultaneously he’s extended his skill-set and progressed with his jumper and pull-up game.

Isaiah Ferguson, Capital Prep – He has a little bit of an unorthodox release, but Ferguson provides a consistent shot-making presence on the wing. He plays off his jumper, provides good offensive spacing, and a guy who is capable of heating up.

Quentar Taylor, Trumbull – Perhaps the most unique match-up in the field, Taylor is built like an undersized forward but handles the ball like a true guard. The lefty is smooth off the bounce with a tight handle, change of speeds, and the ability to create a lot of space with his frame.