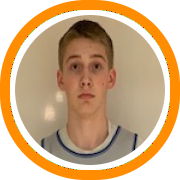 NERR traveled north to Vermont on Friday to host the state’s inaugural Open Gym Series event.  The night proved that the talent within the state’s borders is on the rise, and is an area that must be recruited by college coaches moving forward.

Since his performance at last year’s Elite 75 Frosh/Soph, 2021 Michel Ndayishimiye has long been anointed the top college prospect in the state.  He backed that assertion up on Friday night with his improved jump shot and patented toughness & grit.  A point guard who is capable of getting others involved, Ndayishimiye’s explosiveness & power for a shorter guard is evident in his ability to get downhill quickly and finish plays through contact.  His ability to communicate, play hard, and constantly hound the ball defensively will have college coaches’ attention at the scholarship level moving forward.

While Ndayishimiye was the most well-known prospect to attend, he is not the only one who stood out.  Today, we will highlight those upperclassmen who impressed throughout the night.

DeVonte Jackson (South Burlington, 2021)-  One of the breakout players in the gym, the point guard pushes the ball up the court quickly and looks to get others involved.  He plays off two feet in the lane, and finishes through contact.  His jumper is compact and holds his release high on every shot.  The junior point guard is a very good decision-maker off ball screens, as well.  In our 3-on-3 and 4-on-4 breakdown series, Jackson ran through options (roll, lift, weakside corner) like a quarterback dissecting the defense.

Evan Parker (South Burlington, 2020) -  Parker is a smart player who, although known for his shooting prowess, does all the little things necessary for a team to win. He makes the extra pass and defends at a high level.  His footwork is advanced so he can drill shots moving in multiple directions.

Chas Morgan (Westerly HS (RI), 2020)-  Already attracting interest from local Division III programs, Morgan showed that he can really score in bunches from all three levels.  When he is not filling it up, he does a good job of reading defenders and putting his teammates in positions to be successful.

Tyler Morehouse (Champlain Valley Union, 2021)-  A creative finisher who shot the ball much better within the flow of game action, Morehouse really impressed on Friday night.  He snaps passes and is an all around solid player without a lot of holes in his game. He has a ways to fill out physically, but he proved he can be a priority recruit down the road.

Mohammed Awayle (Rice Memorial, 2021)-  Awayle is a driver with a tight handle that stays low to the ground and is hard to cover for guards of all heights.  The tough combo guard makes shots.  If he keeps developing his point guard skills & decision-making, a jump to scholarship interest is not out of the question.

Ethan Harvey (Champlain Valley Union, 2020)-  Another player who has been on our radar for some time, Harvey is starting to fill out his body and sharpen his game overall. He is bigger, stronger, faster, and as a result, playing his best basketball to date. He has deep rage and is a threat from well beyond the 3-point line.  He also cuts hard off the ball, a skill that is becoming more and more important and one that college coaches key in on.

Aiden Paquette (Essex, 2021)- Paquette is a shooter with college range that defenses need to account for.  He’s slightly undersized, but knows how to play with or without the ball. He has good court vision and great offensive and defensive awareness.

Bila Bogre (Rice Memorial, 2021)-  While much of the attention at Rice this year will be on their guards that can handle & drive at will, Bogre will make sure they have a shooter on the outside to kick to if the defense collapses.  Armed with a quick release, Bogre shot the ball at a high level throughout the action.

Ben Gambill (Montpelier, 2020)-  Gambill is a good shooter who provides even more value because of his calculated shot selection.  He also possesses good positional size, as he handles the ball well enough with the chance to develop into a big point guard down the road.

Joshua Rose (Manchester West,  2020)-   Crossing the border from New Hampshire, Rose impressed during breakdown drills while operating out of ball screens.  He displayed several good passes to the roll man, and made good use of his eyes to not telegraph where he is passing the ball, a mistake even college players frequently make.

Tyler Ricker (Montpelier, 2021)- Ricker impressed with his unselfishness and decision-making.  He has an efficient offensive game in which he does not force his own offense if it is not in the best interest of his team.

Tyler Gammon (South Burlington, 2021)-  One of the hardest playing prospects in attendance, Gammon boxes out consistently.  He has a strong frame to be able to compete on the boards with bigger players.  He also has a great pace to his game on offense, and impressed with his shot-fake throughout the night.

Dave Mercure (Mount St. Joseph’s, 2020)-  Arriving from Hati earlier this year, Mercure has a higher ceiling than nearly everyone in attendance.  He already has outstanding footwork defensively. He keeps his head up in the open court and hits his teammates with the pass instead of dribbling. Armed with a great frame and body, Mercure needs to learn the nuances of the American game and develop his jumper.  If he continues to do these things, he can be a productive player at the next level.

Connor Philbrick (Champlain Valley Union, 2020)-  One of the biggest players in attendance at 6’6, Philbrick showed off his game as one that is not that of a traditional big man.  Even though he has a strong body and should be unmatched physically all high school season, he can handle the ball in the open court and possesses a shot with a high release that extends to the 3-point line. He plays hard and rebounds at a high rate.

Maddox Traynor (Rutland, 2021)-  Traynor is still growing into his body, but is one to watch moving forward because of his solid footwork and use of both hands with the ball.  Once his body catches up, his production projects to skyrocket.

Dylan Hebert (Spaulding, 2020)- For a senior, Hebert has a lot of room for growth in his game.  He plays hard, and is still fairly new to the game.  Those in attendance noted he has only been playing for two years.

Leo Riby-Williams (Montpelier, 2021)-  More of an undersized 4 than a 3 right now, Riby-Williams rebounds well, gives his team energy, makes the extra pass, and is a key cog defensively for his team.  When he does attack the paint in the halfcourt, he is efficient in his use of dribble.

Nick Murphy (Cambridge,  2021) -  A modern day hybrid 4, he can play inside and out.  Murphy has a strong body and a high motor, as well as good footwork in the post and seems like he will grow a few more inches. If he can continue to play tough & rugged inside, Murphy has a bright future as a versatile prospect who can contribute to a team in several ways.