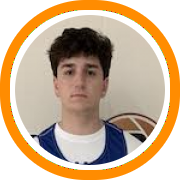 Barrington's Will Rywolt has had a decorated high school career, but he was playing his best basketball yet in recent weeks before the state tournament was ultimately cancalled.

He was averaging 22 points per game in the post-season, up from his 19.5 in the regular season, and had dropped 38 in the divisional semis to lead Barrington into the finals. It was a similar story in the state open as he led Barrington to the Elite Eight.

Unfortunately, when this year's state tournament was cut short, it cost Rywolt a chance at history as he was 30 points away from breaking the school's all-time scoring record.

Nevertheless, Rywolt's four-year career was one for the record books as he proved he was one of the RIIL's very best.

"Tough. Shooter. Those are the first two words I would use to describe Will Rywolt. In over 30 years of coaching basketball at all levels, Will is one of the toughest players and top shooters I have ever coached...Will has literally spent thousands of hours a year working on ways to improve his skills, from participating in camps and individual workouts to playing in different leagues. I have no doubt that he will continue to develop his game in college as he has done throughout his high school career. Will also checks all of the boxes you would want for a student-athlete. He is an excellent teammate, leader and knows the game very well. He is also as tough as they come. He has consistently played in pain and through injuries. Players who work as hard as Will on their game oftentimes comes at the expense of their academics. Will has not allowed that to happen. He has a 3.2 GPA while enrolled in a rigorous academic schedule at a nationally recognized high school...Will is ready to help a college team next year. He is a hard working player, excellent student-athlete and will bring character and toughness to a team. All of that is in addition to the plethora of ways he can help a college team win basketball games on the court."
- David Tedeschi, Program Director, RI Magic

"Will is hands down one of the top shooters in the state, which earned him an All-State honor. Over the last five years I have watched his game evolve into much more than just a spot up shooter. Will is a great playmaker and is very crafty around the rim. Being an undersized guard, he does a great job of using his body and speed to score from anywhere. He can fill up the stat sheet quickly. There have been many games where he will get hot and have 30-40 points. Will has unlimited range and a great ability to get his shot off quickly. He is also a very scrappy defender who is not afraid to battle against bigger/stronger opponents. There have been days where he will have 40 points one game, 12 rebounds in another, then 7 assists in the next; he is the true definition of "do anything to win". Aside from his resilient personality, I have been most impressed with Will's "coach-ability". He is a student of the game who is always willing to listen and learn. He is an incredibly smart young man on and off the court but he is always looking to learn more. He has been a joy to coach and I would highly recommend him to any program. Not only can he score in bunches, he is a great teammate, student and person."
-Brandon DiPaola, Rhode Island Magic

Rywolt is a pure shooter with a compact and efficient release, and the deep range to match. In today's game, with the premium that is put on floor-spacing, there is always demand for guys like that, especially when they come with the intangibles - specifically the toughness and competitiveness - that Rywolt possesses. While he's expanded his offensive repetoire over the years in order to be able to be the offensive catalyst that Barrington needed, he's should have an easier transition than most to the next level because he still has a clear niche offensively, the physicality to defend multiple positions, and the mentality to adjust to less volume and touches, which is an adjustment that every high-scoring guard has to make upon reaching the college level. In short, guys who are tough, smart, and who can really make shots help you win games at the next level.