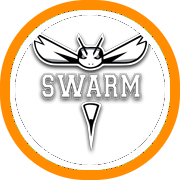 Who is the biggest AAU program in New England?

Unless you’ve been paying very close attention over the years you probably don’t have any idea.

It’s not a sneaker sponsored program or even one that has been around for an especially long time, at least not in its current form.

The Central Mass Swarm was started in 2006 and had only five teams under its umbrella ten years later when it was taken over by Mike Byrnes, who was just a senior in college at the time.

What has happened in the three years since is perhaps the most rapid expansion of any grassroots program in the entire country.

In year one, the program grew by 500% and expanded from five to 30 teams. Next, the Metro West Swarm was born out of the M-Plex in Mansfield, Massachusetts and began to compound itself with similar speed.

That expansion created the prototype that led to further opportunities in facilities and programs all over the country. What was once Central Mass Swarm is now Swarm AAU Basketball, sometimes known as Swarm Nation, a program operating out of 16 states with teams for both boys and girls in grades 3-12 of various skill levels.

Collectively, the program serves basketball players all over the country and starts by teaching them developmental skills from a young age and continuing that instruction until connecting them with collegiate opportunities. The Swarm also began a partnership with the Jr. NBA in 2018.

So, in this latest edition of the summer recap series, we focus not on a few specific players but on the growth of the fastest rising AAU program in the country.

What was your program’s biggest accomplishment this summer?

“Our biggest accomplishment over the summer was our success rate. Yes, we sent some players to play D3 basketball and some others to prep schools which we are very proud of, but we also helped many players get to college and helped them through the entire process, whether they are playing basketball in college or not.”

Was there an individual player who stood out, or improved, most for your program this summer?

“As we are still a young program, most of our teams and players are still at the middle school or early high school levels. We have lots of talent in our high school division this year. Most of which is coming from the freshman and sophomore class, which we are very excited about.”

“The Swarm is all about development. From 3rd grade to 12th grade, we want to help our players reach their ultimate potential on and off the court. We want our players to learn how to battle through adversity. We feel that we offer players the full package and are excited to continue to develop our players and new players who will be joining the program in the coming seasons.”