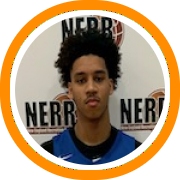 The New Haven Heat was initially founded in 2002 by Frank Redente but disappeared for a stretch until re-emerging in 2014 under the direction of Rick Kennedy.

While Rick continues to serve as the director of the program, his son “Doc” Kennedy is more visible on a day-to-day basis as the club’s director of operations.

They are also maybe the most rapidly expanding program in Connecticut, both in terms of quantity and quality. They’ve grown from having just one team in 2014 to having 12 this past year, including a pair of varsity teams that had a number of strong showings throughout the year.

What was your team’s biggest collective accomplishment this summer?

“We had several accomplishments as a program this year. Our varsity team won their division at the NERR Super 16 in May and then we combined with our two varsity teams for the summer and ended up getting to the finals of ZG Nationals, winning the 19-and-under AAU national championship in Orlando, and then getting to the finals of the Super Showcase. We also beat three or four sneaker sponsored teams this year.”

Kazell Stewart, Prince Tech, 2020 & Isaiah Earl, 6’8”, Lee Academy, 2022 – “Stewart picked up an offer from Bryant University and Earl picked up an offer from Quinnipiac University. Stewart is a little different because he has crazy athleticism and made a little bit more of a splash this year at Prince Tech but before that he was really under-the-radar and he still has a lot of work to do. He joined our team late this season and had been a role player his whole life [up until that point] but he showed his competitiveness and motor more and more with us and became one of the big-time players in the program.”

“Earl is a true New Haven Heat kid who has been with us since the 7th grade when he could barely make a lay-up or play at all. He got a little better each year and then everything really started to pop for him this year. He’s a better shooter, better ball-handler, and has a lot more confidence in his game. He’s also reclassifying to 2022 so that will help too. He’s got a 7-foot-1 wingspan and plays both sides of the floor. He’s a very good player.”

Joel Pullen & Mikey West, Lee Academy, 2020 – “These two guards have been leading our teams since the eighth grades. Without them we wouldn’t be the program we are today. They can both shoot anywhere and the gym and are two of the top playmakers in New England. They have hearts of lions. Every time we play a sponsored team, they show why they belong and that their skill-set is on another level. Joel was also named the MVP at AAU nationals.”

Julius Raudonius, Lee Academy, 2020 – “Julius is a seven-footer from Lithuania who has improved so much since last year and is still getting better. He improved his offensive game and is becoming a total beast. He spent all summer in New Haven to adjust his game and adapt to the American game.”

“We are most excited for our 16u team next season. With Earl reclassifying to the class of 2022 at Lee Academy and Justin Covington reclassifying to 2022 at St. Luke’s, it makes our 2022 class even deeper. We also have standouts from the area like Matthew Gibbs from Hillhouse, Isaiah Riley, and Ali Aklin from Hamden High plus more. This team will have the grit and skills to make a lot of noise this season coming up.”