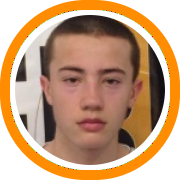 Stars of Tomorrow Camp wrapped up yesterday having uncovered prospects in both the classes of 2017 and 2018.

Here's a look at what rising sophomores made impressions on Day #3 and then stay tuned tomorrow as we'll recap the camp as a whole.

Dom Ciringione - Small forward with a nice combination of size and skill - takes it strong to the basket in transition, on the cut, and off the aggressive one-dribble-drive from the arc. Plays with toughness both on the perimeter and interior while crashing the glass hard on both ends.

Nathan Firlings - Well-rounded, versatile guard had a terrific all-around weekend as he consistently scored the ball and distributed. Has a nice back-court skill-set and a great feel for the game. Makes his teammates better.

Giovanni Aga - Small forward with length and a nice set of perimeter skills to go along with a nice feel for the game. Nice potential as his game continues to develop and he gets stronger.

Shaun Abbate - South-paw guard has nice-touch shooting the basketball and does a nice job of softly using the window softly off the dribble drive.

Dylan Gordon - Big-man with length who challenges shots, runs the floor, finishes around the basket, and has the makings of a nice interior offensive game.

Samuel Whittle - Wing-guard got hot from long-distance on numerous occasions over the weekend and showcased impressive shot-making ability off the dribble in traffic.

Luis Nieves - Off-guard moves well with the ball in hands. Has a emerging perimeter skill-set and a nice feel for the game with which to work.

Collin Parsch - Tough-competitive guard plays crisp team-ball and spreads the floor for his squad by moving without the ball and knocking down three-balls.

Andrew Varoli - Skilled comb-guard really knows how to play the game and can fill a variety of roles in the back-court. Knocks down shots from the perimeter, facilitates, handles, and finished with creativity at the basket.

Michael Gilligan - Strong-rugged forward runs the floor hard to finish at the basket and plays with physicality in the lane and on the glass.

Nicholas DeMarino - Versatile-scrappy forward is strong and plays with physicality in the paint on both ends. Shoots the ball very well with range extending out beyond the arc. Facilitates for his mates both from the perimeter and interior. Like his feel for the game.

Alvie Stoddard - Hard-working big man battles in the paint on both ends and will step out and spot up from behind the arc, creating space for his teammates by drawing the opposing big-man away from the hoop.

Dylan Gordon - Long big-man who challenges shot attempts by the opposition, runs the floor and has the makings of solid offensive-game on the interior.

Joe Aberdale - Southpaw wing knocks down threes and plays with length as he take it hard to the basket on the drive both in the half-court and in-transition.

Chad Dicenzo - Versatile off-guard who finishes in transition and can knock down the three. Uses good speed to the fill the lanes and finish on the break.