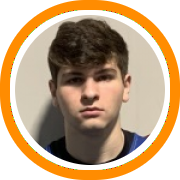 Like many point guards, Tommy Lorenzetti's impact couldn't be measured by statistics last year. His impact on winning though was undeniable as his unselfishness and reliability on both ends of the floor where invaluable for St. Paul's.

His role should change next year though as St. Paul's graduates four seniors and will need Lorenzetti to not just be the floor general like he was this year, but also a consistent playmaker.

That's a role he's been preparing for in recent months with the long-term goal of playing college basketball at a D2 or D3 school, where he hopes to study pharmacy.

As a junior point guard, I knew my role on the team, consisting of four seniors, was to follow my coach’s instructions to the letter, set plays, distribute the ball to the open man, run the break, rebound, play hard nosed defense and score when open and needed. Although I only had a couple of double-digit scoring games this past year, I fulfilled my role to help us win and make the state tournament. I look to score at three levels as a senior leader this upcoming season and continue to fulfill my role and run the offense as the facilitator helping my teammates to do the things that help us win.  I have worked hard every day in the weight room and on the court and my 3-point shooting has improved immensely as well as my penetration to the basket. I know how to kick to the open man. I will be taking on the tough assignments on the defensive end and continue to lead and control the game according to the coach’s plan. My several years on the CT Passion AAU team have put me against some very tough competition of which I have tenacity, confidence and calm when playing against the better teams in our conference.

"In my almost 30 years as a boys varsity basketball coach, I may not have had a more dedicated, self-motivated, hard-working player as Tommy. Extremely coachable and a sponge when it comes to suggestions and improving technique. A very good on-ball defender who loves a challenge. Yearly improvement will pay huge dividends in upcoming Senior season. Shoots it, drives it, defends it."
- Steve Phelps, Head Coach, St. Paul Catholic

"Thomas Lorenzetti is the true definition of a basketball junkie. In the 2019-2020 high school season, he hit open shots, was able to breakdown defenses off of the bounce and always seemed to make the right basketball play (like the 'hockey assist' or 'one more'). Tommy is a 'team first' guy who loves to win and is always willing to be coached. With his work ethic, I anticipate him having a successful senior campaign."
- Julio Vasquez, St. Paul's Assistant Coach and CT Passion AAU Coach

Lorenzetti is a hard-working, unselfish, two-way player. He shares the ball, works hard on both ends, and puts the team's success above his individual stats. He not only approaches the game the right way though, he's also able to execute. He's fundamentally sound with a high basketball I.Q. and so he's a reliable decision-maker who can come off pick-and-roll and is increasing capable of knocking down open shots.