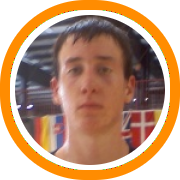 Although the Breakers hail from Rhode Island, their showcase included players from throughout southern New England with Massachusetts, Connecticut, and the Ocean State all well represented.

Here is a look at who stood out:

Marianapolis Prep – Almost everyone from the class B powerhouse was in action on Sunday and many of them managed to shine at various points throughout the day.  Particularly impressive was post-graduate Reuben Cabrea who was productive both inside and out, as well as Chris Flores who made shots from the perimeter while also attacking the rim with authority.

Brimmer & May – The Class C school was also well represented as Eric Alleyne, Brian Johnson, Brendan Rollins (pictured), and Troy Robinson were all on hand.  The foursome teamed with O’Bryant senior Ike Azotam to make the “light blue” team the most dominant team of the showcase.  Johnson and Rollins set themselves apart as Johnson was bulling his way to the basket and getting all over the glass while Rollins was running the floor, finishing in transition, and knocking down perimeter jumpers.

Louis Montes – The powerful swingman showed some flashes of brilliance as he caught alley-oops above the rim and elevated above his defender for the mid-range pull-up.

Danny Majchrzak – The East Lyme (CT) product is an absolute jet from one end of the floor to the other.  If that weren’t enough he also showed himself to be a pesky defender and a consistent threat from behind the three-point line.

Kevin Lentini – In a setting where team play is often ignored, Lentini was able to impress with his basketball I.Q. and work ethic.  He was the only player we saw who dove on the floor after a loose ball today and also impressed with his knowledge of how to move without the ball in his hands.

Mick Kelly – Probably the most impressive underclassmen in the field, Kelly was virtually automatic from behind the three-point line while also getting into the lane and finishing with surprising efficiency against much bigger players.

Alvin Durrett – The senior guard from Putnam Science Academy (CT) combined good quickness with a tight handle, which allowed him to break down defenders consistently throughout the day and make plays inside the lane.

Aziz Dieng – The New Hampshire native never found much of an offensive groove, but he has obviously spent a lot of time in the weight room.  He has a chiseled physique and should be ready to make a big impact at the Pomfret School (CT) this year.

Jeff Schmeltz – The Rhode Island native is quick on his feet for a big guy and can also pull opposing shot blockers away from the basket with his shooting range.

Paris Massey – Another guy who has clearly been in the weight room as his frame featured some improved muscle mass and obvious cut.  He was probably the best shot blocker in action today.

Dennis Clifford – Big men don’t get a lot of touches on the low post in showcases, but Clifford made the most of his limited opportunities showing good footwork and a soft interior touch.

Mike Rivera – With good quickness, a tight handle, and a very good three-point shot, Rivera has all the tools to play at the division I level.  Word is that he will pursue a post-graduate year next season to further his chances.