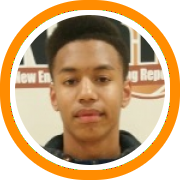 There were a variety of juniors that managed to stand out during both the combine style breakdowns as well as the full exposure games on Sunday at the Elite 75 Academic Experience.

Andrew Fleming, Oxford Hills – With division I offers already on hand, Fleming had nothing to prove on Sunday, yet walked away proving plenty, most of all his character and humility as he played extremely hard all day long and was clearly among the top talents in attendance.

Kena Gilmour, Kent – The best scorer in the field, Gilmour was assertive from start to finish on Sunday. He went to work in the open floor, slashed to the rim and even played from the mid-post – throwing down a drop-step two-handed dunk on a smaller defender.

Nick Seretta, Northfield Mount Hermon - Seretta isn’t new to the elite 75 having had great performances in the past and he didn’t disappoint on Sunday. Seretta is a tough guard who has an uncanny ability to get to the rim and finish with his strong frame, but he also showed off an improved three-point stroke as well.

Brenden Vessichio, Wilbraham & Monson - Vessichio is a big guard who has good athleticism and a versatile skill set, he was at his best in transition, running the floor, throwing down a few dunks and finishing with contact. The smooth swingman was also a threat to knock down threes and pull-ups alike.

Jonny Blaize, Milton Academy – One of the best on-ball defenders in the field, Blaize made it a point to standout on that end in both the combine and games. Offensively, he made plays off the bounce and showed a nice pull-up game as well.

Nick Tupanjanin, Milton Academy - One of the best shooters in the field, Tupanjanin displayed a soft shooting stroke both off the catch and dribble and didn’t even need much space to get it off. He was certainly one of the guys to catch the attention of the coaches in attendance.

Mat Catizone, Woburn – A sharp-shooter on the heels of a huge junior season at Woburn, Catizone looks ready to pick up right where he left off to start the upcoming AAU season as he was making shots and plays alike.

Connor MacIsaac, Rivers School – He was at his best going to the rim, using his athleticism around the rim and soft touch to finish over opposing defenders. During the combine drills, he showed he could be a scoring threat with his back to the basket as well.

Charles Fisher, Sacred Heart High School - One of the best ball handlers in the field, he showed off his skills with smooth crossovers and drives to the basket finishing well through contact, while also reminding those in attendance why he is also capable of being a high-level on-ball defender.

Corey Romich, Groton Dunstable – A big wing and good three-point shooter, Romich did his best damage from behind the three-point line, even jabbing into deep threes at one point, while also passing one in the open floor.

Justin Guerette, Cape Elizabeth – He’s both competitive and physically strong, and consequently productive at both ends as a result. Guerette has clearly worked hard to develop his frame and was able to score in different ways around the rim.

Isaiah Fontaine, Williston Northampton – With a long, athletic and mobile 6-foot-9 frame, there were flashes of upside from Fontaine throughout the course of the day, especially on the defensive end where he could disrupt a variety of different plays.

Kyle Coughlin, Beverly – You could tell just by watching the way he moved without the ball that he knew how to play, but Coughlin was equally impressive playing pick and roll, drilling open pull-ups and even coming off screens for jumpers.

Liam Harris, Kent School – His jumper would catch your eye initially but it was the little things that really separated him as he was toughness, vocal on the defensive end and full of intangibles.

Tinga Adiang, Vermont Academy – The athletic and active lefty missed the better part of the season with injury but looked healthy here, showing his high motor to cover the court and make plays both going to the rim as well as one the defensive end.

J.D. Levine, Poly Prep – Good things come in small packages in the case of this generously listed 5-foot-9 point guard who made plays from all over the floor and showed why many expect him to be a priority recruit among academic programs.

Stay tuned to the New England Recruiting Report later today for our final recap from the Elite 75 Academic Experience, covering the new 2016 prospects added to the NERR database.