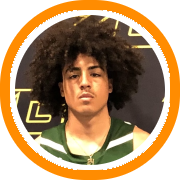 Our 2023 rankings roll-out takes us to the Ocean State of Rhode Island today where there are a handful of true local products within the RIIL joined by prospects in the two most notable NEPSAC schools in the state, St. Andrew's and St. George's.

As a reminder, only prospects who are returning to the region are currently eligible for this edition of the rankings, until we've have a chance to see all the newcomers and insert them together.

As it currently stands, the St. George's duo of Tayeshawn Cunningham-Pemberton and Ryder Anderson sits atop the class with their teammate NeJohn Fortes and the Saints' Patrick Spenard. Bishop Hendricken's Azmar Abdullah, who is the top ranked prospect in the state association, rounds out the top five.

Cunningham-Pemberton is a budding big guard who is originally from Connecticut but previously under-the-radar. Anderson is a physical big man inside while Fortes is a versatile, and vastly improved, forward. Spenard is a big who can play inside-and-out while Abdullah is a playmaker in the backcourt.