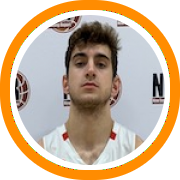 Earlier this week, we profiled the 2021 edition of the Prodigy Basketball Club as part of the Be Seen Tour 2.0.

The group came out of the gates intent to make a statement this spring, delivering a breakout performance at the Northeast Hoops Festival and showing they’re ready to make noise for the rest of the spring and summer.

Collectively speaking, this is as deep and talented a roster as the program has had in several years.

Jaden Brewington, Putnam Science – He probably helped himself more at the Northeast Hoops Festival than any other player on the roster. The power guard has size and strength alike in the backcourt. He plays with an attacking mentality, is able to absorb contact on his way to the rim, and make plays in a variety of different situations. He also gets credited for having a high basketball I.Q. and being a good communicator.

Mark Newell, St. Sebastian's - Newell was the other player who made a statement with his performance at the Northeast Hoops Festival. First and foremost, he's grown to right around 6-foot-7. He's strong, physical inside, and able to bang with some of the region's most established frontcourt prospects. He showed some bounce around the rim, rebounded, blocked some shots, and is now working to expand his offensive game.

Ryan Rudnick, Governors Academy - A skilled 6-foot-7 forward from Canada, Rudnick is a prospect we first came across when the Be Seen Tour traveled to Governors late this winter. He immediately intrigued with his potential as his combination of size and skill fits the modern game perfectly and gives him a clear niche. The key is building up his body. What he has shown since is that when he gets hot with his jumper, he's capable of making shots in bunches!

Aidan Olivier, Cambridge - Another power guard alongside Brewington in the backcourt, Olivier has a strong and compact build to play through contact and hold his spots on both ends of the floor. He also proved himself to be a reliable floor general and dangerous three-point shooter. Coming off an all-star season at Cambridge, Olivier is proving himself to be a definite college prospect.

Cody Cannalonga, North Reading - Cannalonga is probably the best pure shooter on the team, and that's saying something with this group. The North Reading prospect may be a bit undersized but he's skilled, fundamentally sound, and able to make opposing defenses pay with only a glimmer on sunlight. He's also versatile in that he can play a leading role with the ball in his hands but also be valuable off the floor because of the gravity and floor-spacing he provides.

Coming off an all-star season at North Reading, Cody Cannalonga picked up right where he left off to start the grassroots season with @ProdigyBB_PYR - https://t.co/z7LHksOkOe

Markus Nordin, Hamilton-Wenham - Another skilled perimeter threat, Nordin is a consistent shooter from behind the three-point line but also versatile in that he is a scoring threat at all three-levels. What makes him unique though is that versatility is matched by his efficiency as he plays within the flow and knocks down shots from various spots on the floor depending on what the defense givs him.

Hamilton-Wenham & @ProdigyBB_PYR wing Markus Nordin @m_nurdin18 is a prospect that college coaches need to familiarize themselves with. https://t.co/NvL9bQGG4V

Jayden Okorougo, Brimmer & May - With so many shooters and floor-spacers on the roster, Okorougo provides a much needed burst of athleticism. He's a slasher and defender who thrives in transition, can utilize his physical tools to defend multiple positions, and continues to work on expanding his own skill-set.

Tyrone Manderson, Saugus - A late-bloomer who has recently shot up to 6-foot-5, Manderson is both a late-bloomer and a coach's son. He's a heady player and good rebounder with a developing shooting stroke of his own.

Joe Gattuso, Woburn - A throwback style point guard and ideal blend player, Gattuso runs the show with a high IQ. He's a good decision-maker who distributes the ball and makes good decisions, but also anchors the team with his approach on the defensive end.

Rayan Sablon, Stoughton - The rising junior is playing up with the varsity team and intent to prove his worth after coming off the bench this season for Stoughton. He has the confidence of the Prodigy coaching staff and is expected to grow into an important role here.