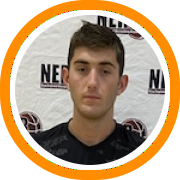 While the majority of our attention was focused on the upperclassmen, there were still a handful of underclassmen who came and were able to make an impression.

Tops among them was Bonney Eagle freshman Elliot Bouchard. The 6-foot-9 big man comes from good stock, already has good size, a strong frame, soft touch, and the ability to turn both shoulders in the post. It’s hard to imagine there’s another freshman in the state who could match his combination of productivity and potential as he’s sure to be one of the 25 prospects to know in New England’s class of 2023.

Bouchard wasn’t the only legacy prospect in the class of 2023. Scarborough freshman JP Estrella’s mother played at Boston College. He’s already 6-foot-4 and very likely still growing. He has a soft touch and the potential down the road to develop into a big man who can stretch the floor.

The third freshman to start to make a name for himself was Luke McNabb. One of the youngest players in the field, he impressed with his length and athleticism and should have a four-year varsity career in the state.

Jack Stowell, Falmouth - A pure shooter who put on a show in the shooting competition, drilling over 50 shots in just four minutes, Stowell was nearly automatic in rhythm with a very soft ball.

Zach Morrill, Falmouth - The 6-foot-1 guard stood out with his passing and finishing while in attack mode but also differentiated himself as a tenacious perimeter rebounder as well.

Brady Coyne, Falmouth - Yet another talented young guard from Falmouth, Coyne is the younger brother of former Bates’ guard Tom Coyne, and is skilled with a clean shooting stroke and compact release.

Nick Langella, Deering - A good sized point guard who has a steady hand and mature overall approach, Langella should be capable of seeing a significant role during the upcoming high school season.

Matt Waeldner, Yarmouth - He’s undersized but scrappy, hustling and defending throughout. Offensively, he can shoot it and has a burst. Overall, he’s a growth spurt away from making a major jump.

Gabe Carey, Greely - He’s sound fundamentally and seemed to always be in the right place at the right time but what stood out the most was his shooting stroke.

Ian Murray, Kennebunk - Murray is a young and still just developing in a lot of areas but he showed a lot of markers for future success and clear long-term potential.

Tayshawn Lindsay, Deering - Another talented and multi-dimensional youngster at Deering, Lindsay can handle the ball as a guard or provide a slashing presence on the wing.