Lexington Will Be Kingsley Onyenso’s Next Stop 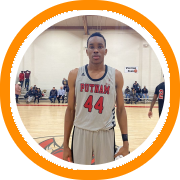 Putnam Science Academy big man Ugonna Kingsley Onyenso announced yesterday that he will be joining the University of Kentucky this fall.

Kingsley Onyenso, a native of Nigeria, came up through the NBA Academy Africa program in Senegal. He had his first experience playing in America last summer with Team New England. After heading back home for the next few months, he decided to play the second semester at Putnam Science Academy.

While at PSA, Kingsley Onyenso was immediately inserted into the starting lineup for a team that finished 38-0 en route to winning the National Prep Championship and AAA Power 5 Conference. He averaged 11.4 points, 9.0 rebounds and 5.7 blocks per game

Kingsley Oyenso played his final season of club basketball for the New York Jayhawks of the Adidas 3SSB Circuit.

“Ugonna is a great young man and what a bright future he has,” said PSA head coach Tom Espinosa. That Kentucky up and down style is going to fit perfect for him."

“Even though he was at PSA for a short time, he left a huge mark on the program. One of if not the best big man we have ever had. Runs like a deer, phenomenal hands, nice touch. He only will get better and better.”

“On our official visit, Coach Calipari discussed the NBA game and how he enforces positionless offense as it’s most translatable way of getting his guys prepared for the league,” said TNE co-founder Isaiah Davis.

“Best part about Ugonna is that he is a GREAT kid! He is the most humble and high character kid I have had the opportunity to coach outside of another wildcat, Kellan Grady.”

Kingsley Onyenso becomes the seventh member of PSA’s 2022 class who will be playing at an NCAA Division One school this upcoming season.