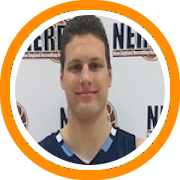 Kehoe is a New Jersey native who graduated high school without a division I offer in the class of 2021, but proved himself to be a division I player during the travel season with the New Jersey Panthers.

He first appeared on our radar when the Be Seen Tour traved to see the Panthers in June. Even then, it was clear that Kehoe's size, consistent motor, and ability to impact the game in the paint would translate to the division I level.

He went on to lead the Panthers to the HGSL championship only weeks later before adding multiple division I offers from schools in both the Northeast Conference and Patriot League.

Below are some of his spring highlights with the Panthers.

Here are some highlights of Kehoe with his @njpanthersboys team from last spring.

Check him and his @cburyboysbball team out at this weekend's #SRCpic.twitter.com/QGeij4CIB7